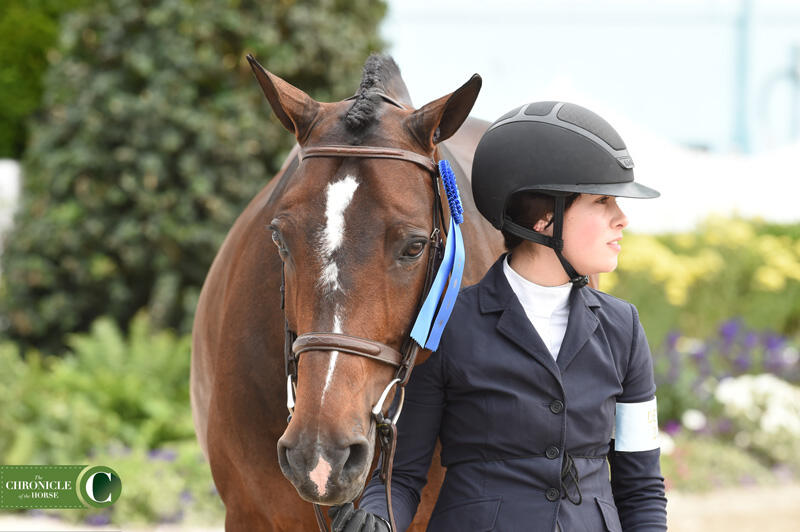 Wondering what the rules are if your short stirrup pony runs away with you on course? Juliette Joseph knows the answer—from many personal experiences.

“When I was younger, I had a pony [Prince] that we bought, and he was kind of abused,” said Joseph. “We got him for like $2,000—super cheap. He had never jumped before and neither had I. We kind of learned everything together.

“When I’d do him in the short stirrup and stuff, he used to take off with me all the time,” she continued. “I would always get disqualified.”

So Joseph changed course. With her legs just barely reaching the bottom of her saddle pad, she and Prince tackled the puddle jumpers. Even then she understood one of the pillars of catch riding—listen to the horse.

Since Prince—whom she still owns—the cards never aligned for her to have her own horse again. Her family purchased an investment horse once, with the intention of creating a buying-and-selling snowball effect to a nicer horse, but that plan didn’t work out. So Joseph offered to ride everything and anything for trainers, catch riding first ponies and then horses as a junior.

When Robyn Stiegler bought back her daughter Demi Stiegler’s former equitation mount Vigo, she wanted a junior to show him. After seeing Joseph ride, she introduced herself.

“When everything first happened, it was obviously a lot to handle and take in,” said Juliette. “I didn’t really want to go out and do things. But [Robyn] kind of, the first week, pushed me to come to the barn. And at first I wasn’t very happy about it. But then I realized having an outlet to do all that was very helpful.”

In addition to Robyn, many trainers on the West Coast stepped in to offer Juliette rides.

“Everyone was really there for me whenever I needed,” said Juliette. “I’m not a person to go ask somebody for help. But everyone was trying to help as much as possible. Nothing ever really stopped for me in riding. If anything, because of that, it kind of kicked up a notch because I didn’t have that much help from home obviously, so everyone put in more hours and more time for me.”

“She is such a talent and so appreciative and such a hard worker that nobody gives it a second thought,” said Robyn. “She is the first rider that they go to. They call me, and they say, ‘Can she ride them? Can she do this? Can she do that?’ ”

“It’s worth it,” Juliette said. “I get to ride a lot of horses every day, and she helps me learn a lot about not only the horses but life lessons that are very valuable. I wouldn’t trade that for anything. Being in this industry, especially not having as much money as everybody else—it’s a very money involved sport. Horses cost a lot, especially the top ones. Sometimes it’s a little hard to know that I’ll never quite have that ability to just go out and buy whatever horse I want. I just have to handle the horses that I have. She just helps me with that. I’ve been through a lot with her. I think I’ve been with her for about three years, but she always makes sure I have a place to stay. She always provides me food to eat and all of that. Just anything I need help with, whether it’s riding or not, she’s there to help me.”

And the horses are always there to remind Juliette what really matters.

“Just mentally it’s a lot, especially when I’m riding for other people, and there’s a lot of pressure in all of that,” she said. “What helps me with that too is just handwalking the horse or going on a trail ride just to get away from all of the materialistic stuff I guess and regaining that sense you’re doing it for the horse.”

Juliette stays realistic about her expectations.

“Of course I want to win a final and go do big things and stuff, [but] it’s not necessarily in the cards for everybody,” she said. “I try to walk in with the best mindset and to ride my best and have the best ride I possibly can. But not with the expectation that I’m going to be in the top 10 because then that makes it that much more disappointing if I’m not. And then if I am it’s exciting and more rewarding. You never know, they’re horses. Anything can happen. Especially when I’m on different ones, I never know if the horse is going to be pulled last minute, or they could get hurt. So, I don’t want to set my expectations so high that I’m going to be disappointed no matter what.”

Last year Juliette rode a different mount for every final, but this year her barnmate Natalie Templeton is lending her Efendi, a horse she’s  shown a few times.

“She went through such a tragedy, and she could have gone either direction,” said Robyn. “She definitely went in the right direction. She values the horses. She values the people that help her. She appreciates every little thing that people do for her. She never says no. She’s always there. Doesn’t matter if her car is breaking down, she finds a way. Demi and I have been so blessed and fortunate. She’s changed our lives just by looking at things so much differently and appreciating things. I feel blessed every day that I have her.”

Originally published by The Chronicle of the Horse
By: Laura Lemon