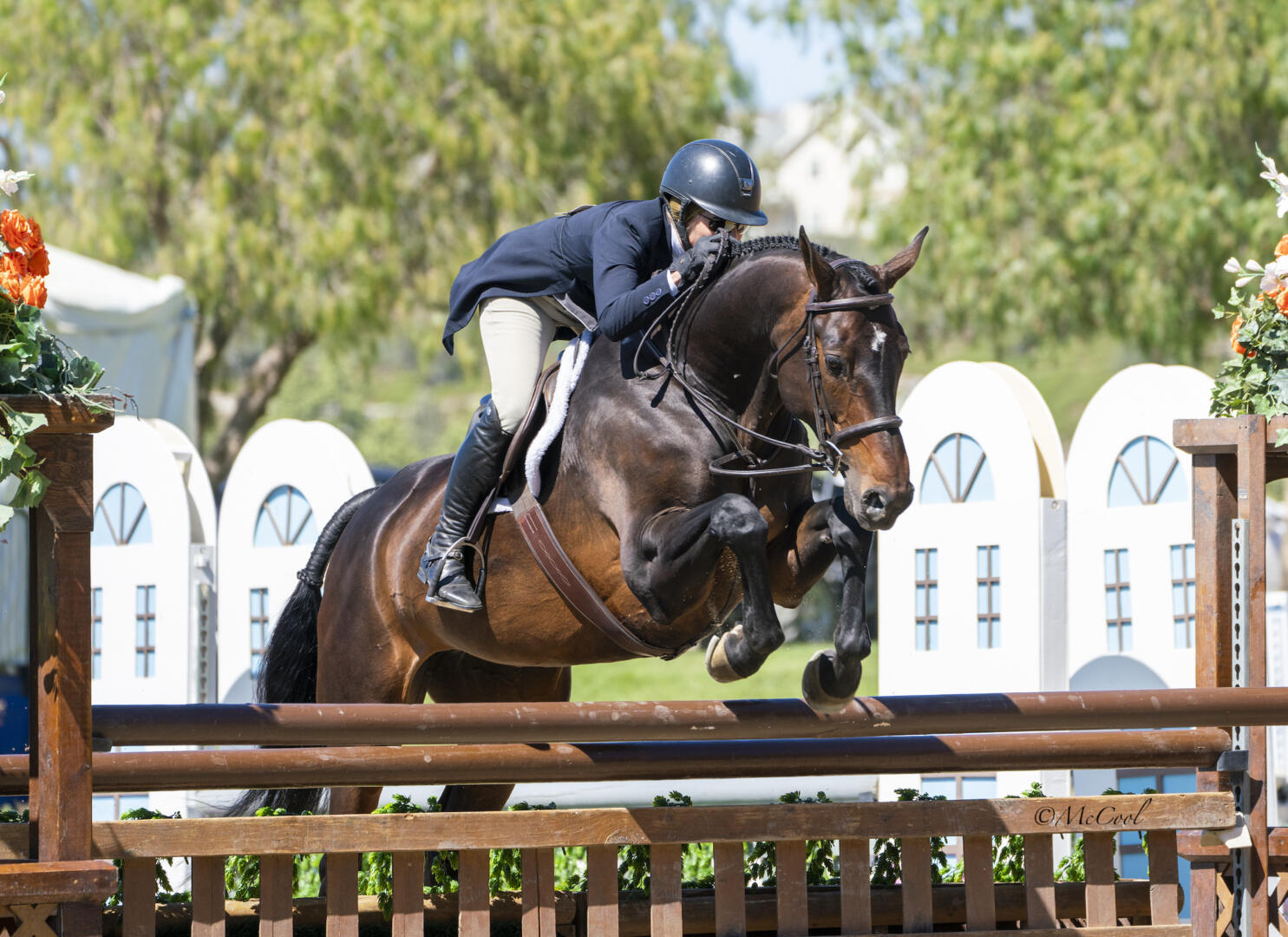 Lisa Wall and Tangled Up In Blue. Photo by McCool Photography

At the conclusion of the first round, held in the Olympic Sand Ring at the Rancho Mission Viejo Riding Park, Wall and Tangled Up In Blue sat in second place with a combined score from the two judging panels of 183.50.

With Nicole Bourgeois and Mc Queen only one point ahead of them, and the win well within grasp, Wall went for it in the second round. She and Tangled Up In Blue picked up a canter immediately from the ingate and went straight for the high-option oxer at the far end of the ring. From there through to the final oxer toward the ingate, they delivered a handy, seamless ride. 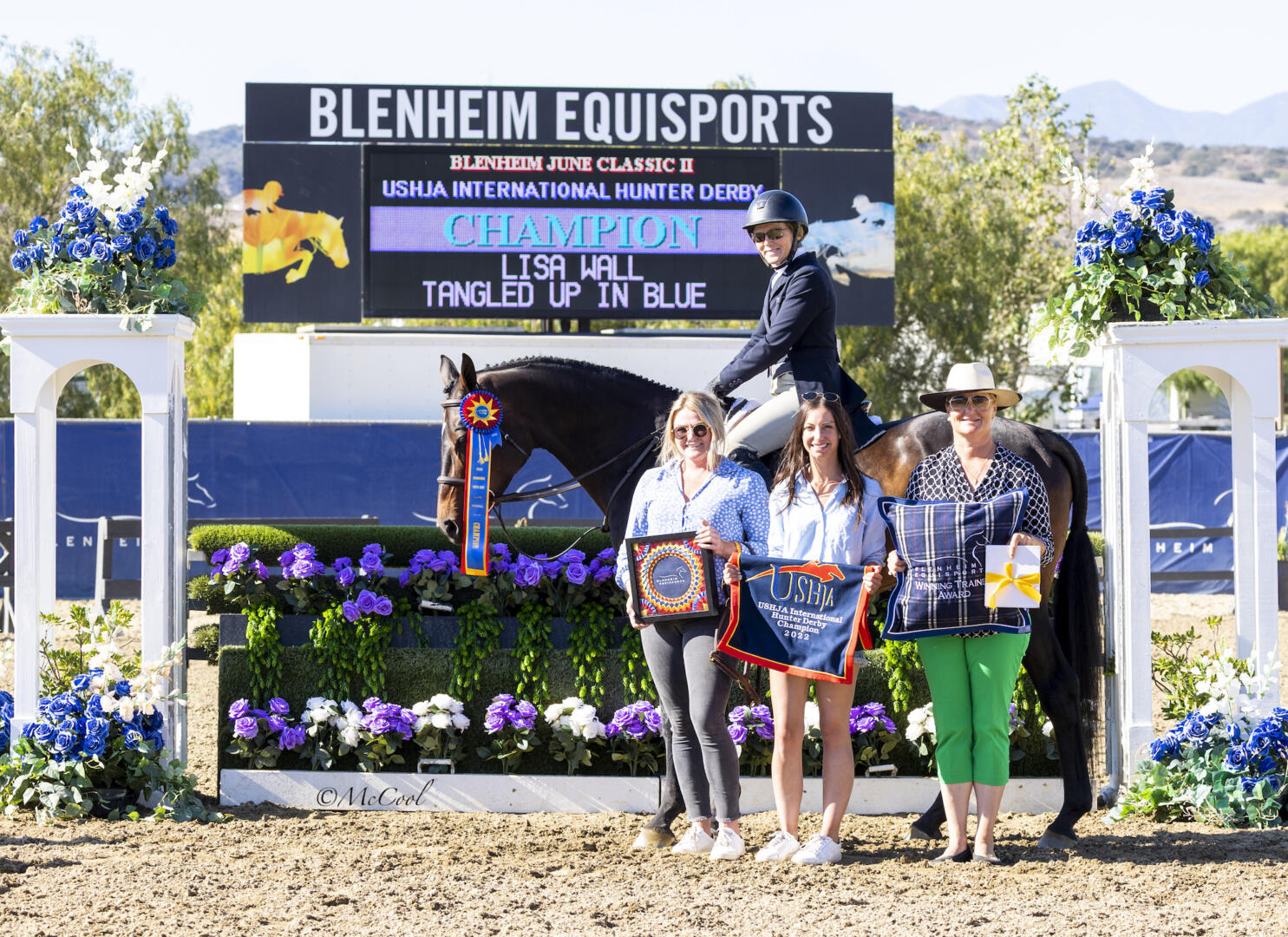 Lisa Wall and Tangled Up In Blue were presented as the winners of the $10,000 USHJA International Hunter Derby held during the June Classic II. Photo by McCool Photography

“I was really excited with the handy round, because [Tangled Up In Blue] was the first one out of the group to do that track to jump one,” said Wall. “She just rose to the occasion; she jumped great.”

Judges Sandy Aston, Diane Carney, Rusty Stewart, and Cynthia Williams rewarded the 12-year-old Dutch Warmblood mare with base scores of 92 and 93. Once combined with handy bonus points and bonus points for electing to take three of the high options, Wall and Tangled Up In Blue earned a second-round score of 207 for 390.50 overall total.

Rounding out the top four was the highest-placed junior rider in the class, Ireland Fravel aboard her own Son House. The high-score amateur award went to 12th place finisher Katie Taylor Davidson riding Theodore Flash. Both riders were presented with $80 Riderzon gift certificates, and Davidson also received a gift certificate from The Plaid Horse. 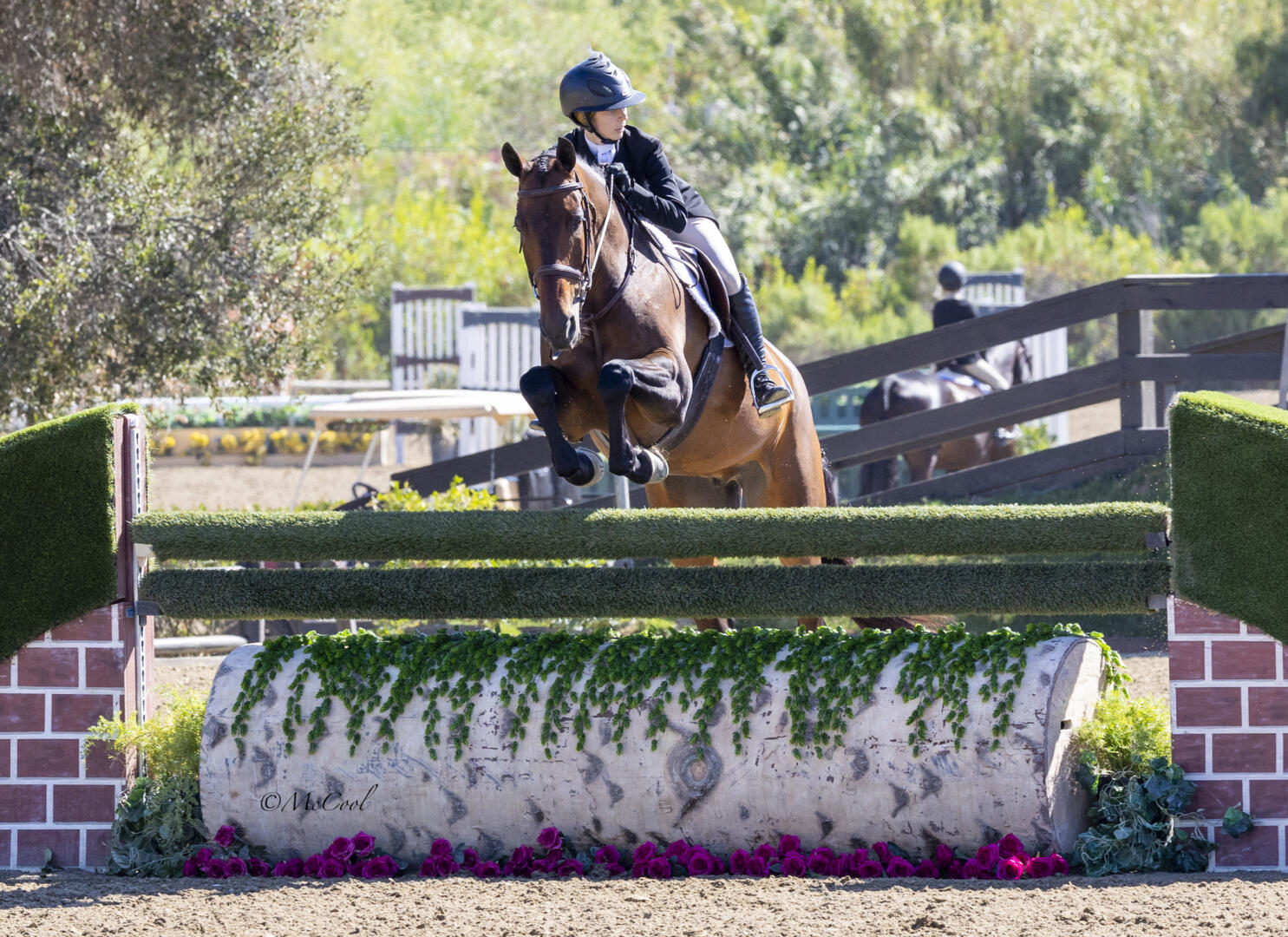 Ireland Fravel, aboard Son House, was the highest-placed junior rider in the $10,000 USHJA International Hunter Derby. Photo by McCool Photography

“[Tangled Up In Blue] loves the stimulation of the competition. In the show ring, she steps into the canter, and she’s all business,” said Wall of the mare known as “Piper” in the barn. “She’s the sweetest mare I’ve ever known.”

Wall has been partnered with Tangled Up In Blue, owned by 3P Equine Partners LLC, for five years, but the mare just stepped into the USHJA International Hunter Derby arena this winter, which makes her win in Saturday’s derby class all the more exciting for Wall.

“We would like to maybe go to Kentucky and maybe ‘Indoors,’” said Wall. “We’ll see, because there’s no rush. All I know is, she is a horse of a lifetime and deserves nothing but the best.” 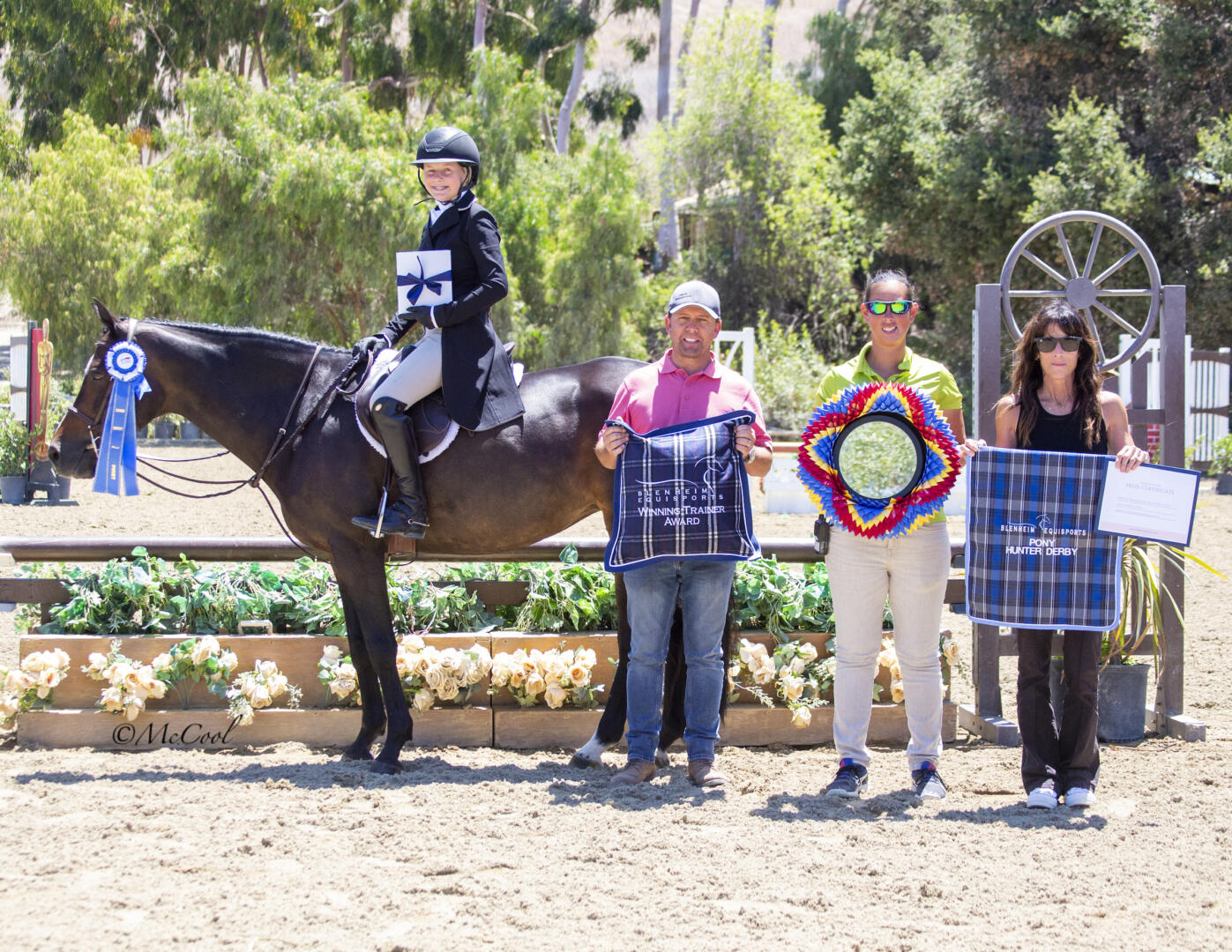 Wall may have earned the biggest hunter win of the week, but she was far from the only hunter derby winner during the Blenheim June Classic II. Earning the distinction of the week’s smallest derby-winning entry was large pony Stoneledge Special Request. The 15-year-old Welsh Pony Cross was ridden to victory in the $1,500 USHJA Pony Hunter Derby, presented by The Oaks Equestrian Facility, by owner Claire Marie Diamond. 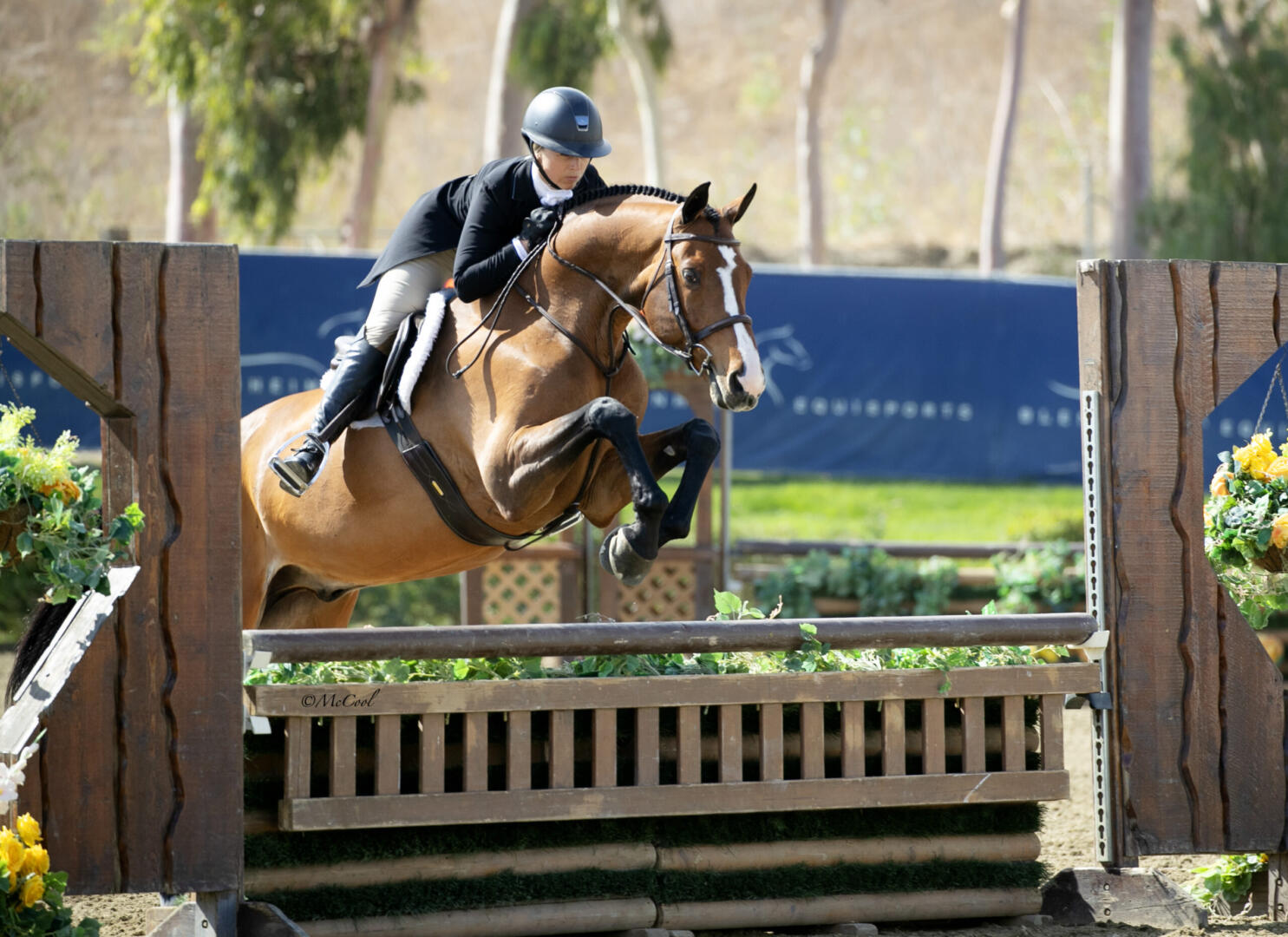 Earning the first derby win of the week were Kylee Arbuckle and Gatsby, owned by Shannon Bird. The duo topped a field of 28 entries to win the $5,000 USHJA Open National Hunter Derby Southwest Regional Championship with an overall score of 364.75. Finishing in second place with an overall score of 359.50 were Julia Rossow and Notorious, owned by West Coast Equestrian Partners, LLC. 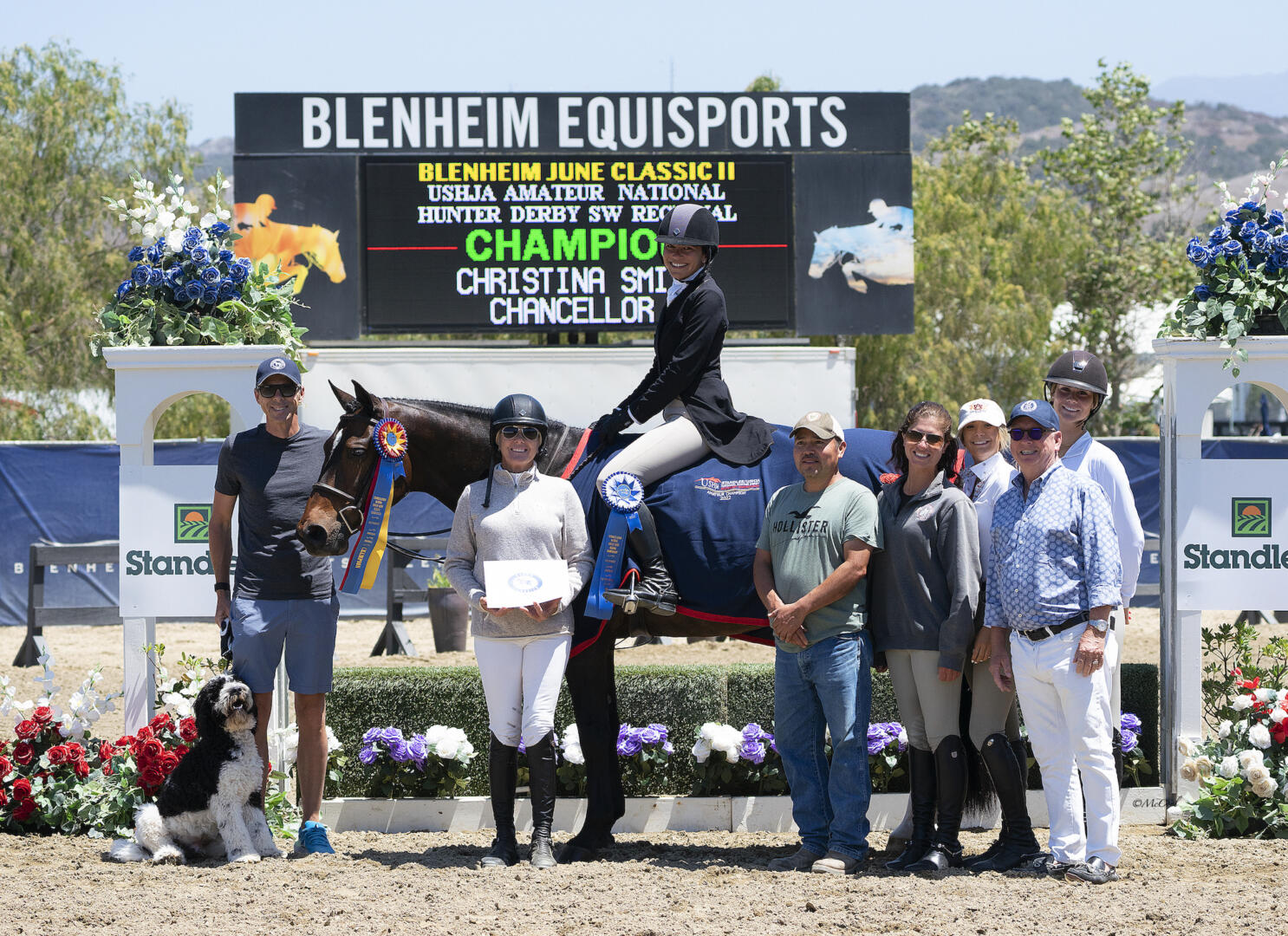 At the conclusion of the first round on Friday, Smith and Chancellor sat in fourth place in the 16-horse field, but with the class held over two days, they returned on Saturday to shoot to the top of the leaderboard. A second-round total score of 179 combined with a 173 first-round score gave them a winning 352 overall score. Second place with an overall score of 348.50 went to Shannon Kelly and Can Do This VA, owned by Hermosa Sport Horses.

In the $5,000 USHJA Junior National Hunter Derby Southwest Regional Championship, it was Skylar Wireman and Bonne Starlight, owned by MZ Farms LLC, who earned the win. The pair sat in second place following the first round, but second round scores of 92 from both judging panels secured them the win with 362 overall score. Finishing in second place with a total score of 337 were Kate Parker and her own West Port. 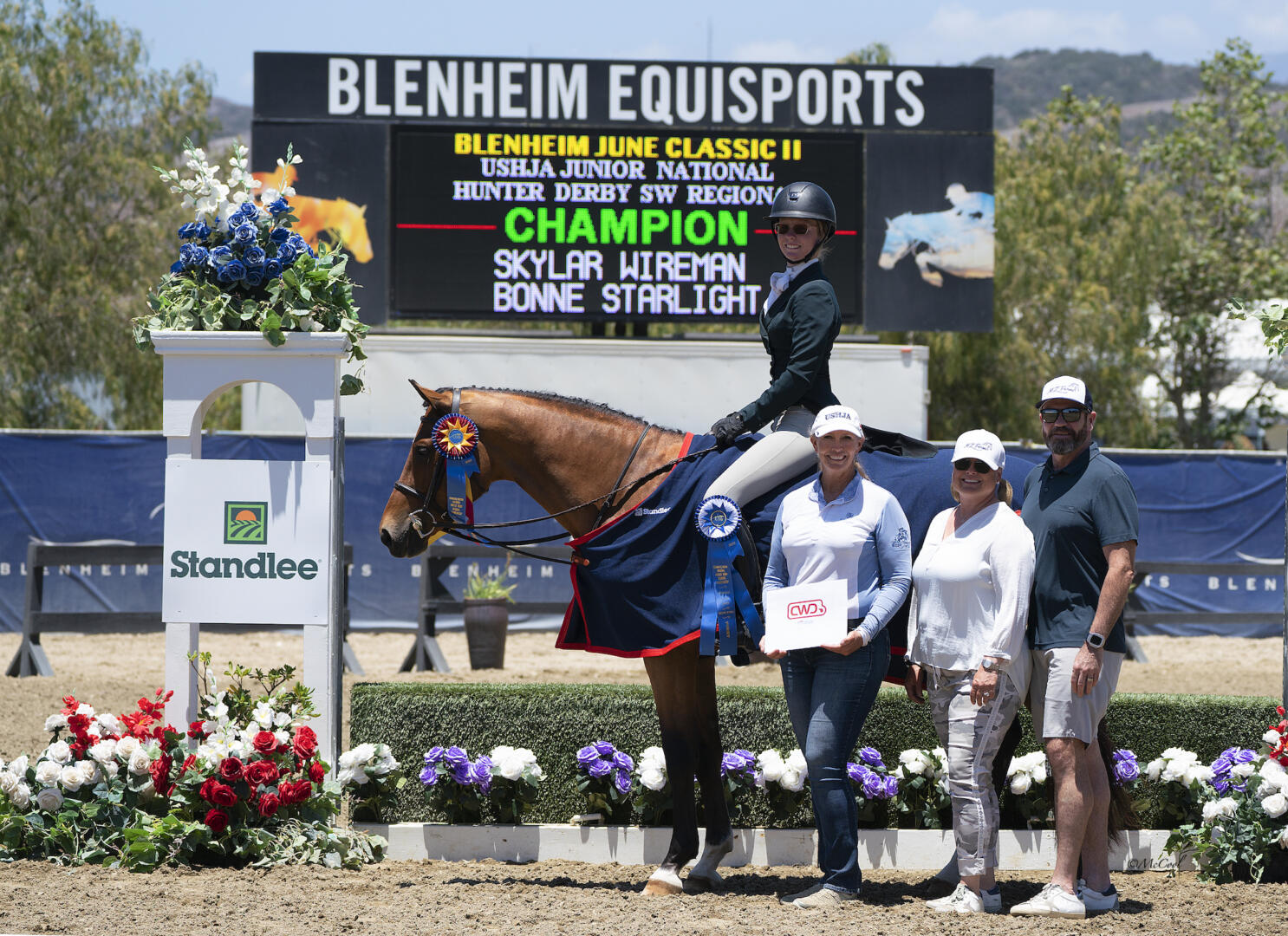 For full results of all of the week’s hunter derby events, visit blenheim.showgroundslive.com.