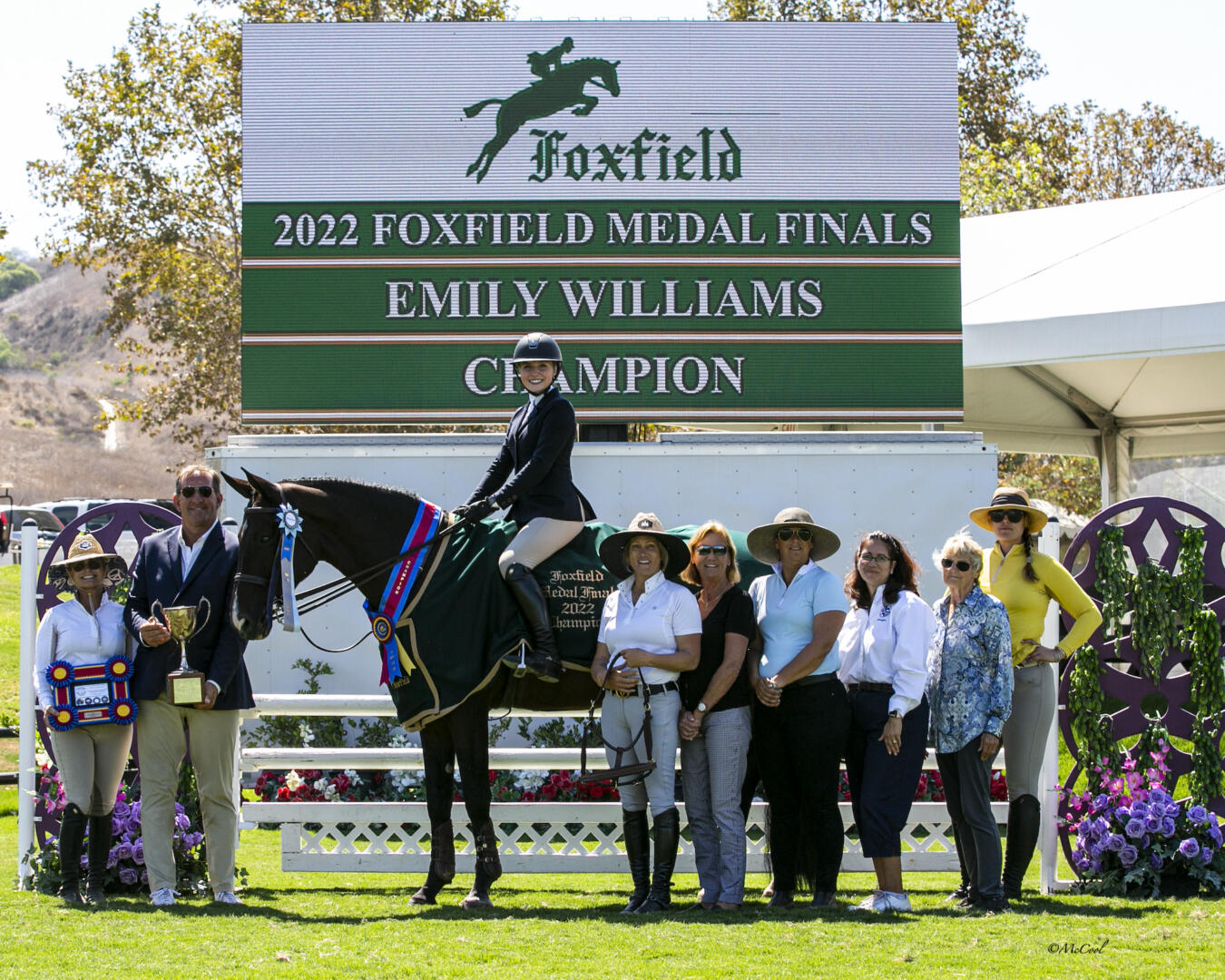 Emily Williams was presented as the winner of the 2022 Foxfield Medal Finals. Photo by McCool Photography

Finishing in second place was Sierra Geisler on One Cool Dude, while Matilda Schulman and Toulouse rounded out the top three.

At the conclusion of the opening two rounds of competition, set on the Oaks International Grand Prix Field, Geisler, Schulman and Williams all sat within three points of one another, requiring them to undergo further testing.

As the frontrunner, Williams was the final rider to go in the work off, and she and her winning mount, Glenti SIH, held on to the lead with a well-executed test that included a trot jump, the holding of the counter canter around a turn to a single vertical and a halt, among other questions. 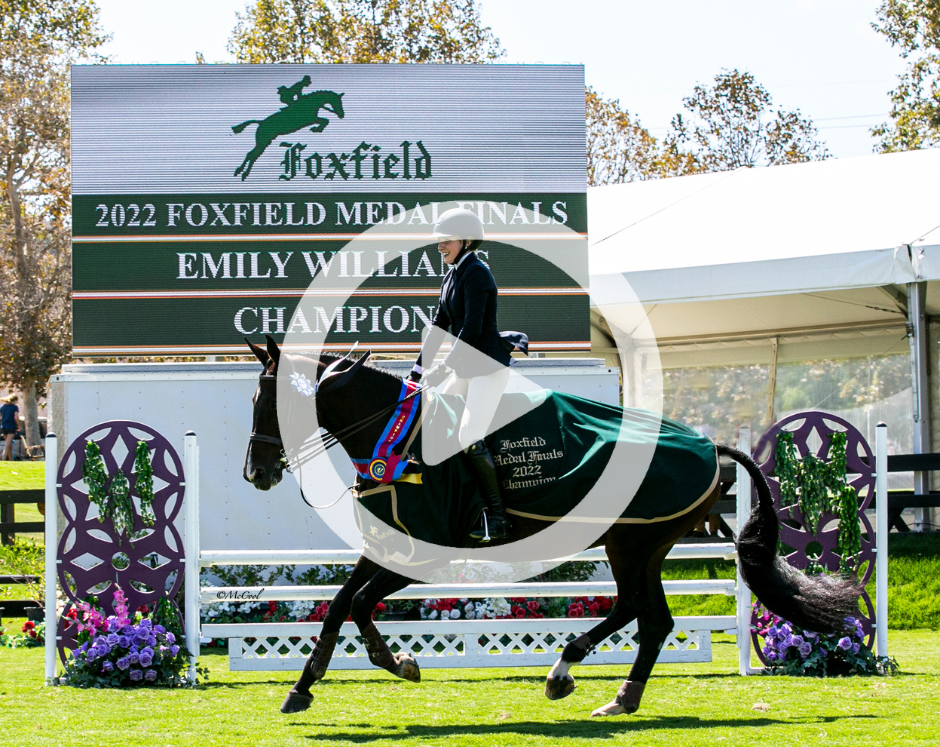 “I thought both rounds one and two rode really nicely,” said Williams. “I really liked all the decorations that they used; I thought the course looked beautiful. I also like the format and that it’s all in one day. They just really try to make it special because it’s such a special medal that they’ve created. They try to keep that legacy going, and I really enjoy that.”

Developed by National Show Hunter Hall of Fame inductees JoAnn Postel and Nancy Turrill, the Foxfield Medal Finals provides amateur riders like Williams with the opportunity to compete in the equitation beyond their junior years. The innovative class helped pave the way for many of the amateur medals in existence today.

As the 2022 winner of the prestigious class, Williams’ name will now be added to the Foxfield Medal Finals Perpetual Trophy. She also received a Topline Design Ribbon Wreaths custom frame and gift certificate, courtesy of Blenheim EquiSports.

Those accolades are particularly impressive for Williams, as she earned them only a week after first partnering with Glenti SIH, owned by Leah a Von Henkle.

“I was in need of a horse for [the Platinum Performance/USEF Show Jumping Talent Search Finals – West], so it kind of just all came together,” explained Williams, who trains with Archie Cox. “I planned on doing the Foxfield, and I just wasn’t sure about my horse. So Glenti was offered as an opportunity, and I’m super grateful. I have to say thank you to Leah for the ride on Glenti and to Archie and Megan Harris for all their help and training this week.” 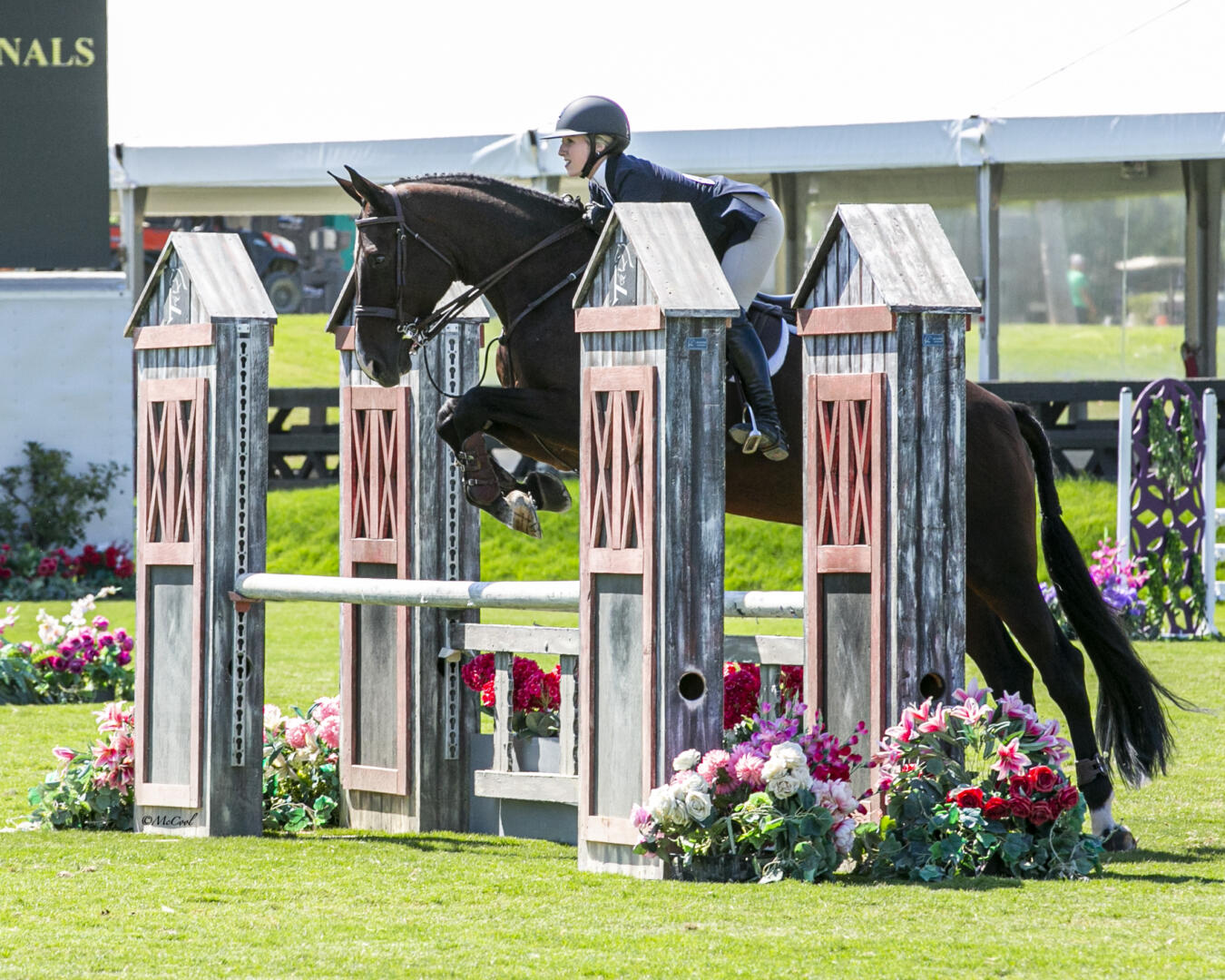 Now, Williams is looking ahead to next week with the 11-year-old Warmblood mare, when they’ll contest the Talent Search Finals, held during the Blenheim International Jumping Festival.

“[Glenti’s] so smooth and has a lovely jump,” said Williams. “She’s a great, great partner and just wants to win. I’m looking forward to next week with her.”