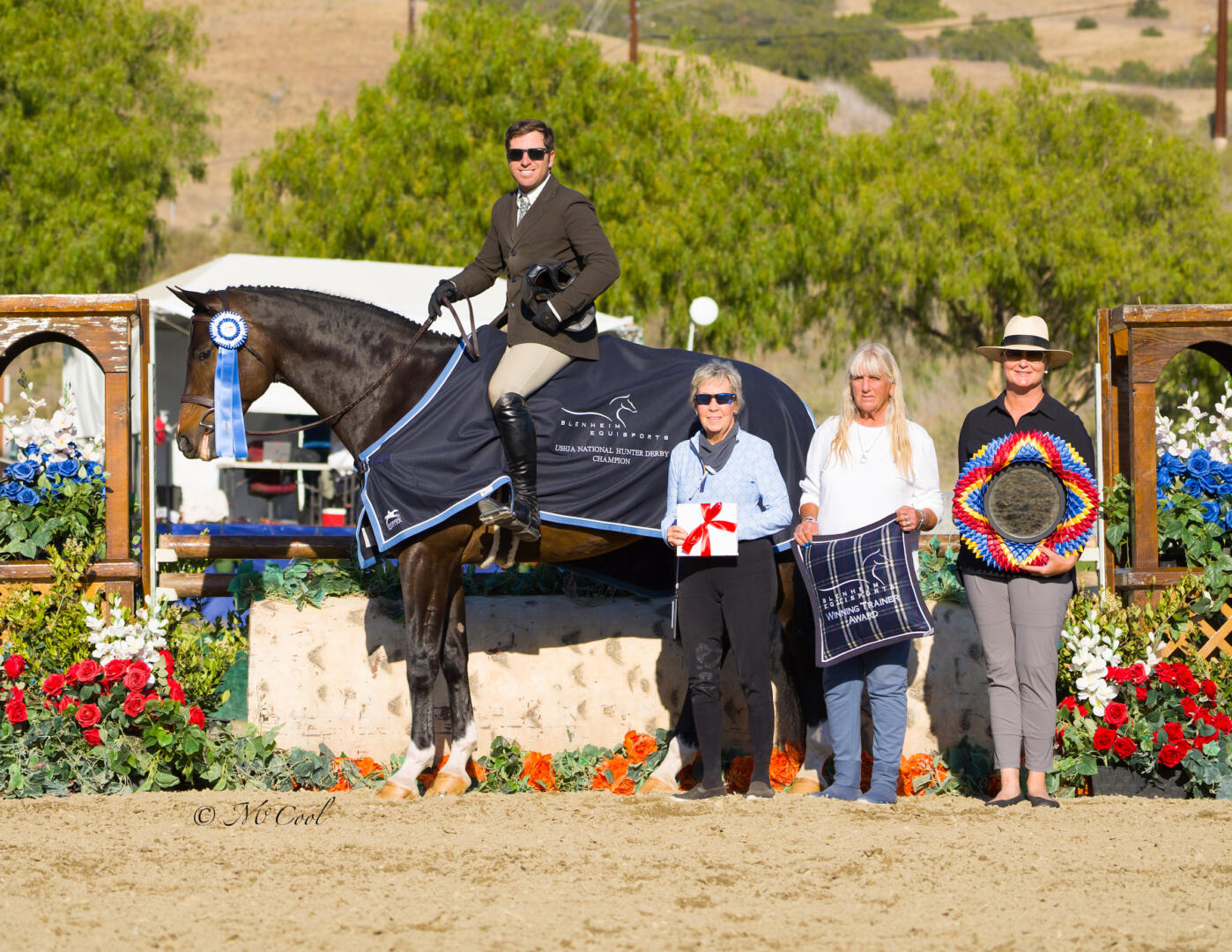 Nick Haness and Reese’s were presented as the winners of the $10,000 USHJA National Hunter Derby on Thursday, May 12. Photo by McCool Photography

May 13, 2022 – San Juan Capistrano, CA – Reese’s is no stranger to the USHJA National Hunter Derby winners’ circle, and with Nick Haness in the irons, the gelding returned there again on Thursday, May 12, during the Blenheim EquiSports Ranch & Coast Classic.

The pair topped a field of 22 entries to win the $10,000 USHJA Professional National Hunter Derby, making them one of three derby winners during the World Championship Hunter Rider (WCHR) week at Blenheim EquiSports. Also earning derby victories were Augusta Iwasaki and Small Moments in the $5,000 USHJA Junior/Amateur National Hunter Derby and Kathryn Padilla and Heavenly Patch of Blue in the $1,500 Pony Hunter Derby, sponsored by Just Jump It. 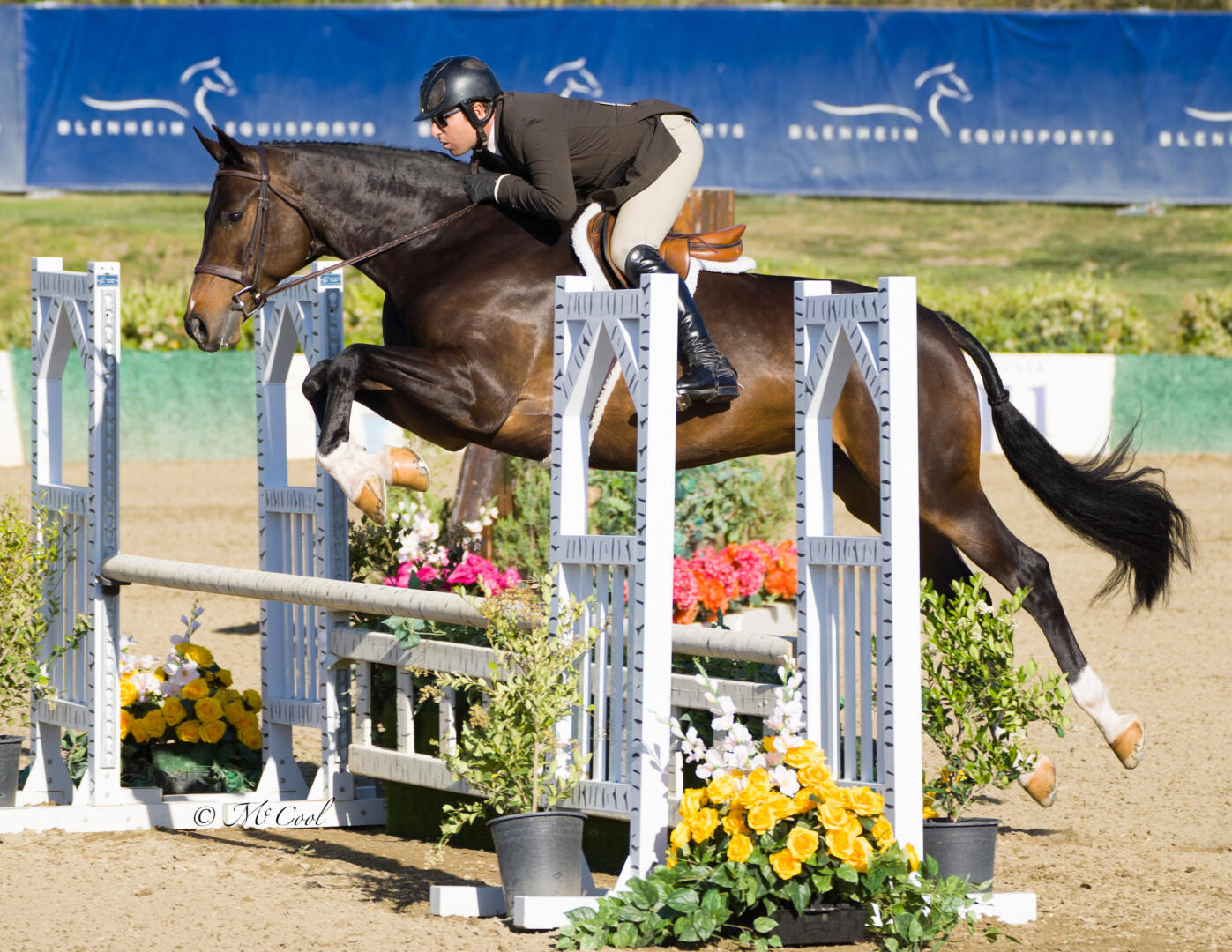 “Reese’s has really found a special niche in these hunter derbies!” said Haness, of the 9-year-old Warmblood, named the 2021 USEF National Hunter Derby Horse of the Year. “He had the most wins and highest accrued prize money in the entire country [in 2021], so we were quite honored to have that be recognized and awarded to Reese’s. He deserves it. He’s an amazing animal.”

Knowing that the derby ring is where Reese’s excels, Haness and owner West Coast Equine Partners set their sights this week solely on the $10,000 USHJA Professional Derby.

“He’s so, so good at this, and we just now try to conserve him and save him for these really special classes,” explained Haness who has had the ride on Reese’s for five years. “With this class being a $10,000, which is a little bit more than the normal prize money, we just tried to target this class, and he was awesome.”

At the conclusion of the first round of the Thursday evening featured class, Haness and Reese’s sat in second place on a score of 91, only to be slightly outdone by Haness’ second entry, Ever So True, with a score of 91.5.

Returning for the second round, however, Haness and Reese’s turned up the handiness and showed where they shine, earning a base score of 92 plus all four high options for a second-round score of 96 and a 187 total. 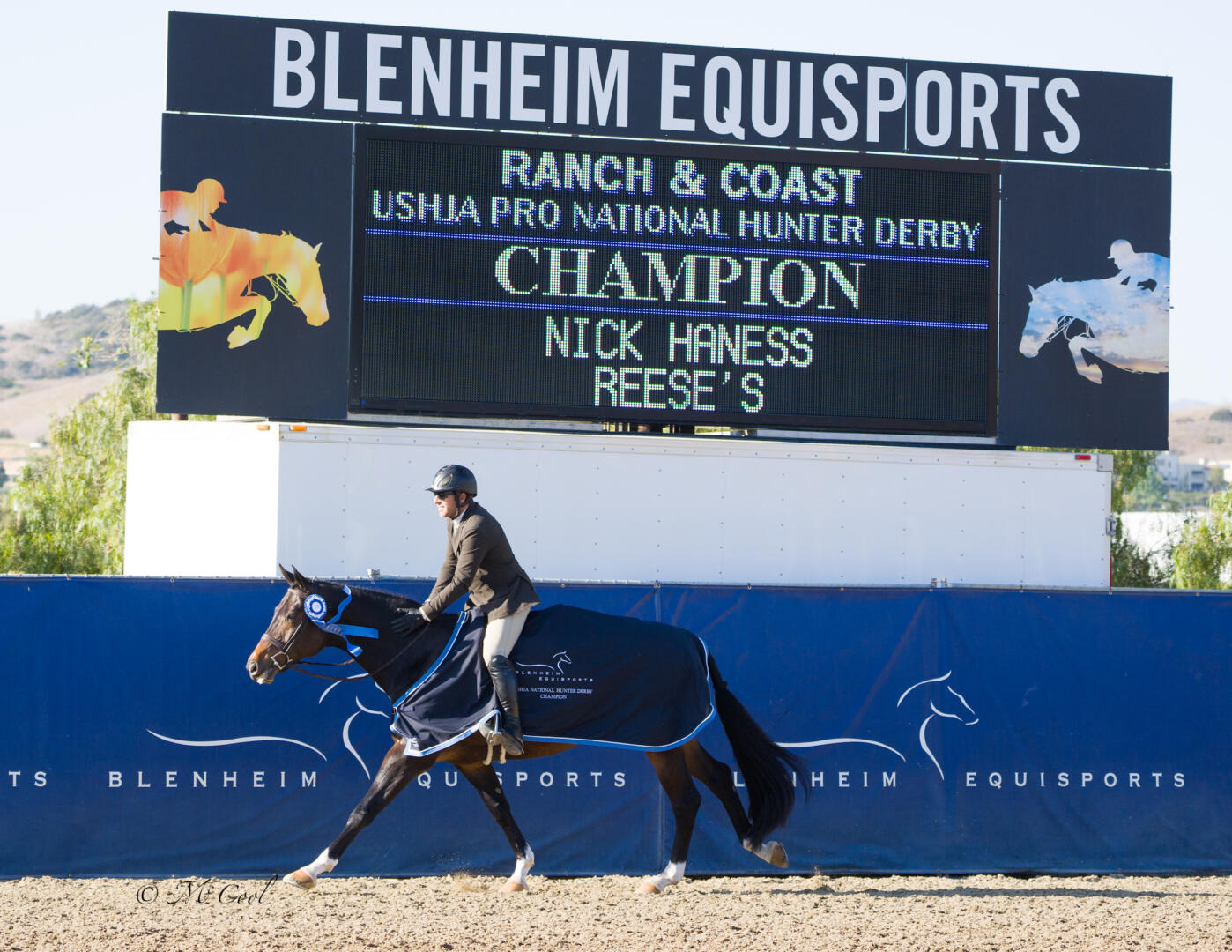 Moving up from fifth to take second place were Jason McArdle and Coup d’Etat, owned by Fairbanks Valley Farms LLC, with a total score of 180.5. Haness and Ever So True, owned by Ava Peck, ultimately finished in third place with a score of 179.5.

“Reese’s has just become a great partner for me in and out of the show ring,” said Haness. “So, knowing he was in second place, I really put the pressure on and came in strong with his handy round, and he was brilliant. He just got better and better and was really, really fun. [The Olympic Sand Ring] is a nice, big arena out there for him to gallop and really show off in the handy and jump the high options and just really open his stride and show some pace. He’s a master at that!”

For the win, Haness received an $80 gift certificate to Riderzon, while trainer Shari Rose was awarded an embroidered tack room pillow from The Clothes Horse and sponsored by Nick Byassee – Equestrian Design LLC. As the owner of Reese’s, West Coast Equine Partners received an EquiTex Cooler, a Topline Design Ribbon Wreath gift certificate, and a Blenheim EquiSports picture frame. 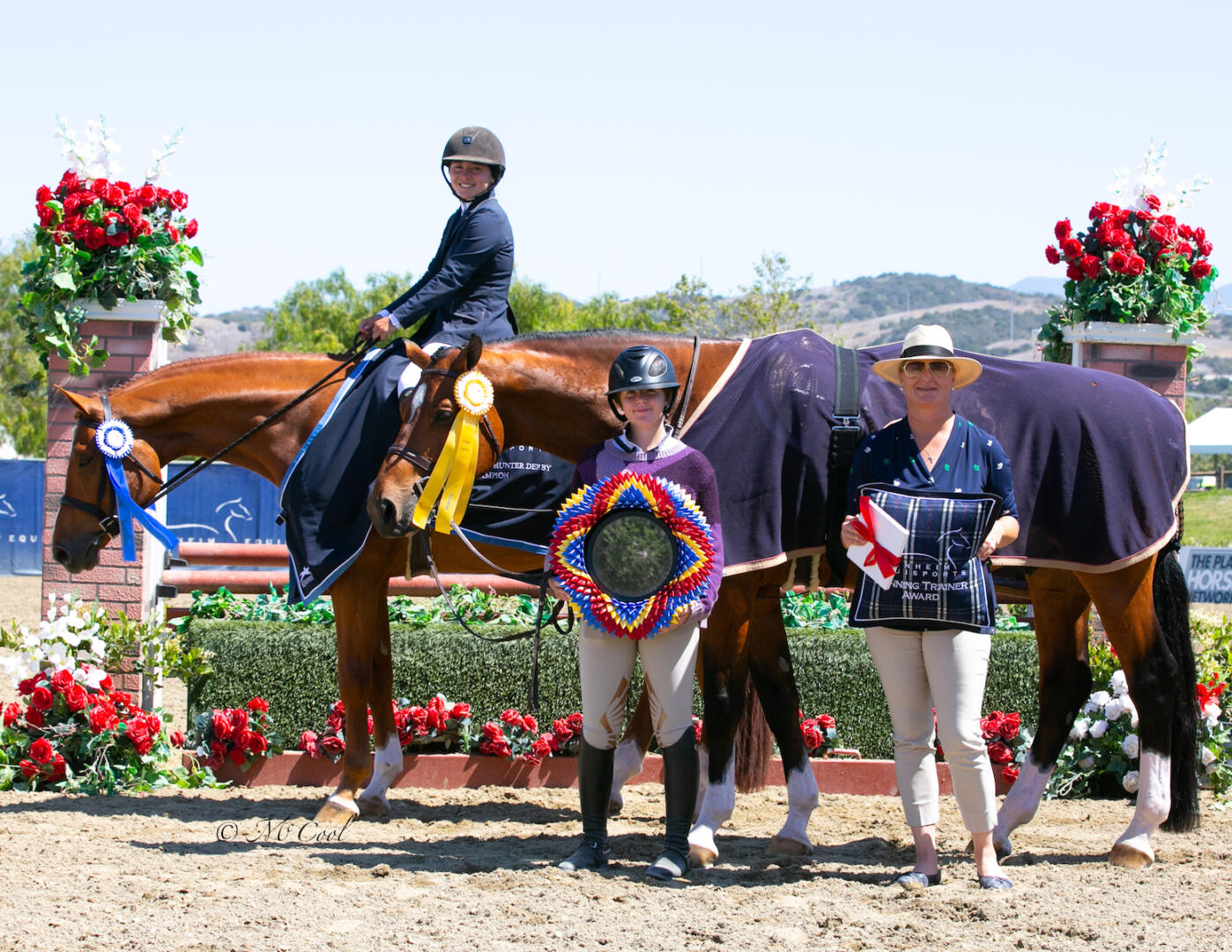 In the $5,000 USHJA Junior/Amateur National Hunter Derby, held on Friday, May 13, it was Augusta Iwasaki and Small Moments who rode away with the lion share of the prizes.

At the conclusion of the first round, the pair sat in fourth place on a score of 91, but slick turns helped earn them a second-round score of 92 plus four high option bonus points for a 96 and a 187 cumulative total.

First-round front-runners Julia Greenspan and Paperboy, owned by Brighton Farms, came into the handy round with a score of 94 and added a 92 to finish with an overall score of 186, just one point behind Iwasaki and Small Moments. Iwasaki also claimed third place with a total score of 185.5 aboard Attendu de Lannois Z, owned by Ashland Farms. 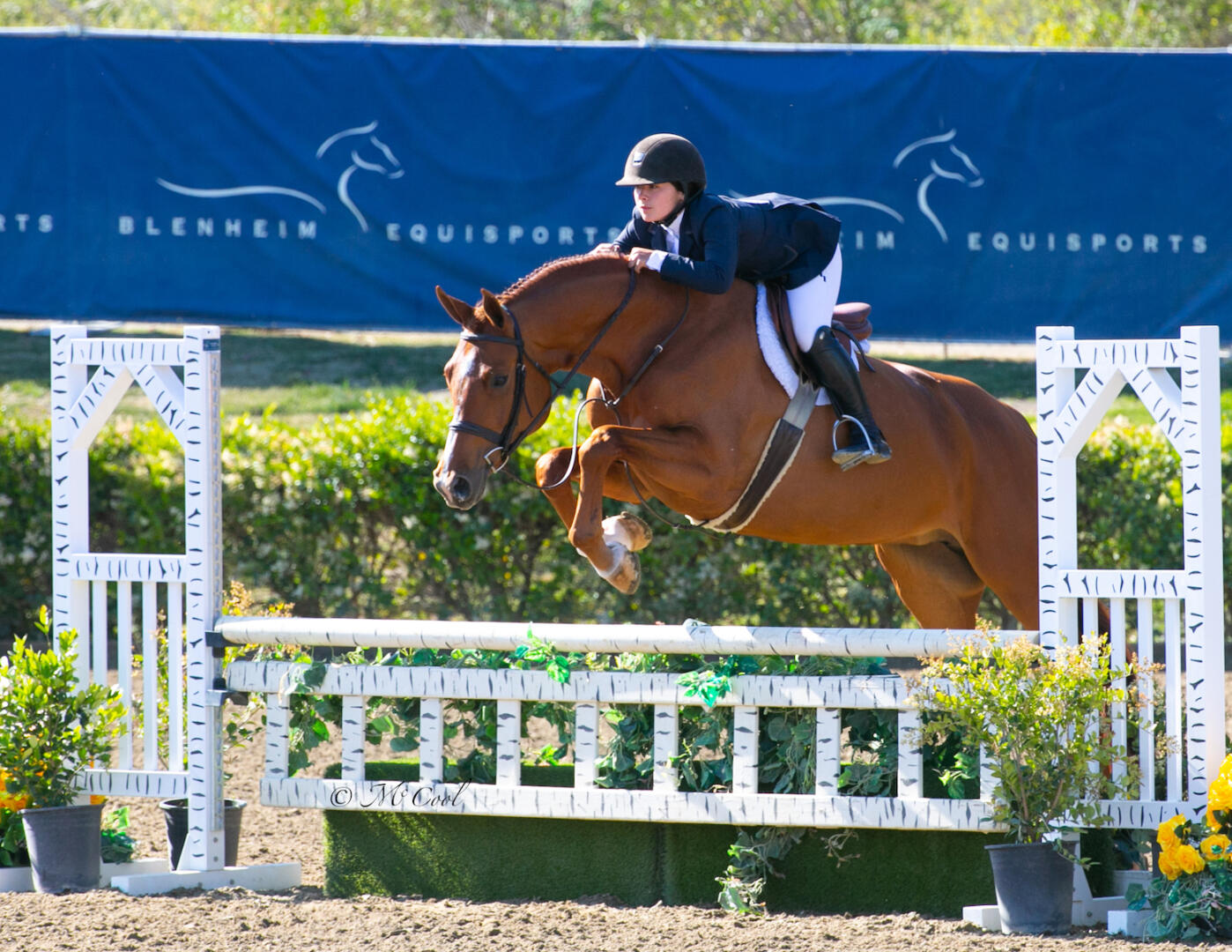 “It’s really exciting!” said 18-year-old Iwasaki of her win on the 5-year-old mare. “We got [Small Moments] this year during the Florida circuits, and we’ve been working with her. She’s a really, really awesome horse. She has a little bit of sass and a lot of personality. She’s a chestnut mare, and she’s a baby so this is actually the second national derby that we’ve done, and in the first one we didn’t make it past the second jump! So, she’s come a long way; I’m really happy with how far she’s come.” 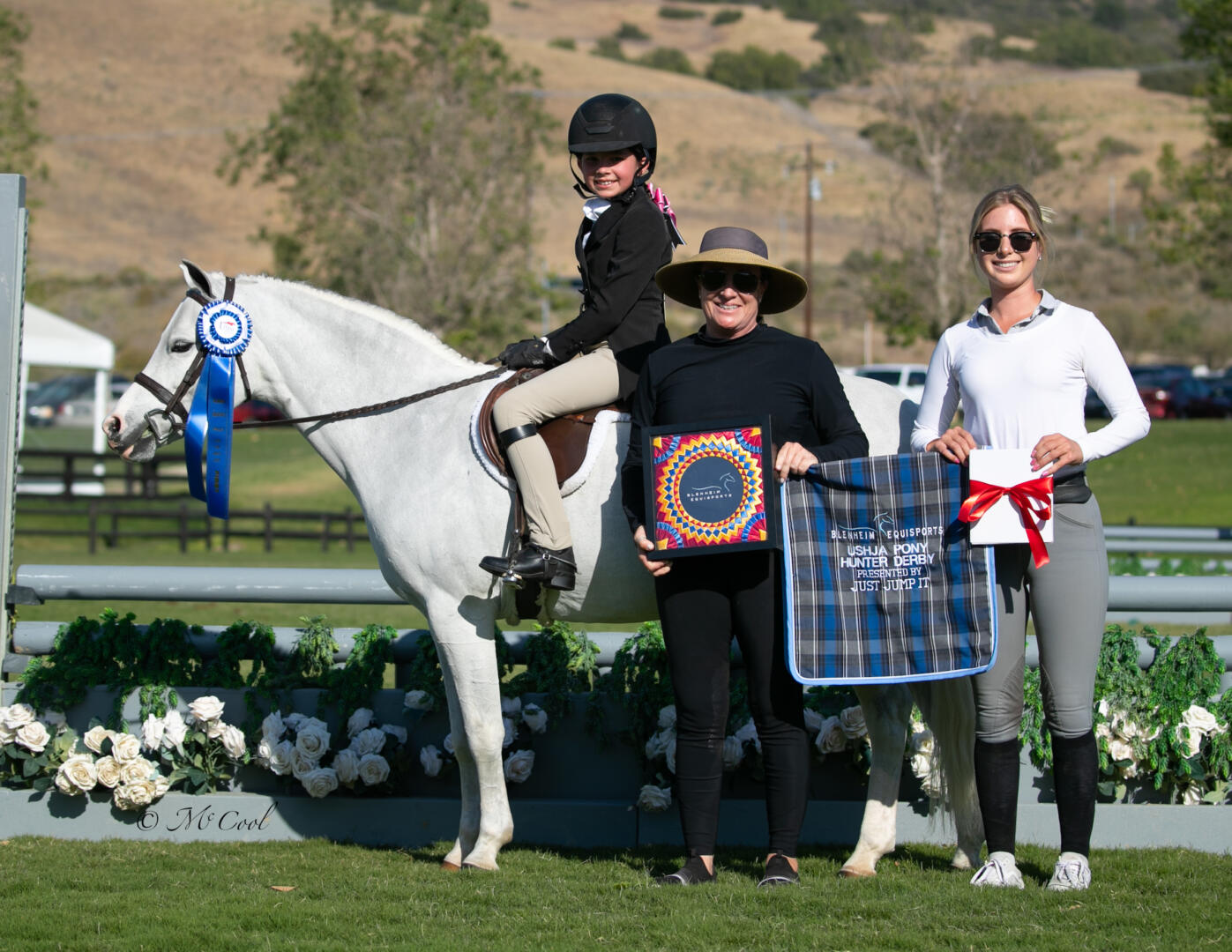 Earning the win in the $1,500 USHJA Pony Hunter Derby, presented by Just Jump It and held on Friday evening, May 13, were Kathryn Padilla and Heavenly Patch of Blue, owned by Highland Farm. Second place went to Claire Marie Diamond and her own Stoneledge Special Request, while third place was presented to Charli Prager and Farmore Good as Gold, owned by Linmar LLC.