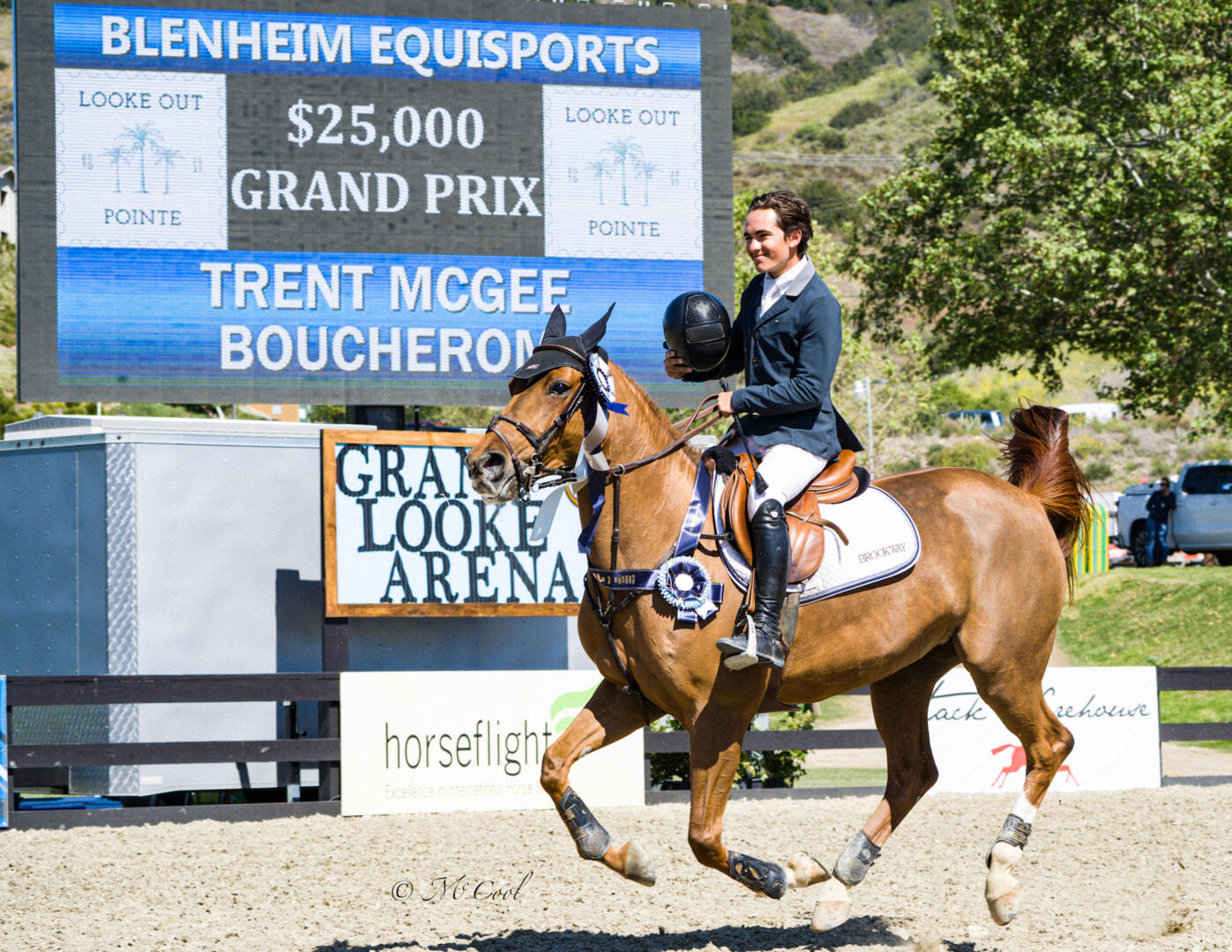 April 15, 2022 – San Juan Capistrano, CA – Trent McGee became the first rider to earn a grand prix win in the all-new Grand Looke Arena on Friday, April 15, during the Blenheim Spring Classic III. McGee and his own Boucherom earned victory in the $25,000 Looke Out Pointe 1.45m Grand Prix, marking not only the inaugural triumph in the new arena but also the pair’s first grand prix win together.

As the kick-off grand prix of the 2022 Blenheim EquiSports show season, Friday afternoon’s highly anticipated class welcomed 19 entries, five of whom were also competing for the win in the U25 Classic held concurrently.

Eric Hasbrouck set an ambitious 15-fence track for the National Standard grand prix, with nine of the 19 entries passing the test and qualifying for the jump-off round.

As the first to go in the jump-off, third place ultimately went to Charlie Jones and Charismo Z, owned by Lindsay Maxwell, who put up a speedy time of 40.285 seconds to set the pace. The third pair to return, McGee and Boucherom, shaved nearly two seconds off of Jones’ time to finish in 38.533 seconds, flying down the final line in seven strides. The remaining six combinations failed to catch McGee’s time, with Lindsay Archer and Jarpur, owned by Rhys Farms, LLC, taking second with a time of 39.589 seconds. 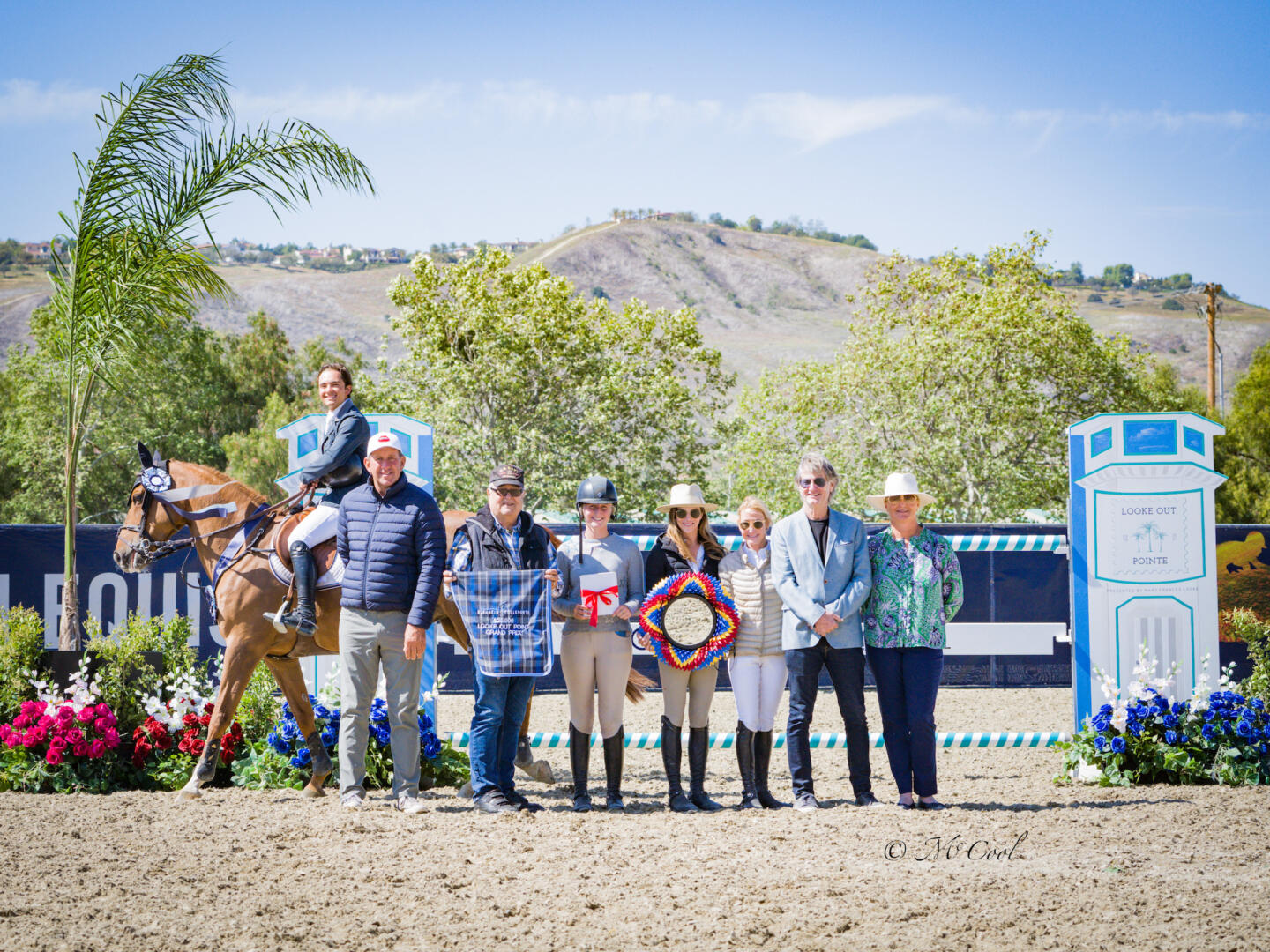 Trent McGee was presented as the first grand prix winner in the new Grand Looke Arena. Photo by McCool Photography

“I’ve been chasing this [win] for a while now,” said McGee, 19. “I’ve gotten a number of second place victories at this facility, so this one feels really sweet. It was a fun grand prix. The track was amazing, so I couldn’t ask for anything better.”

It was through his role as a working student for boss and trainer, Archie Cox, that Boucherom and McGee were introduced.

“She’s a 16-year-old Dutch Warmblood,” said McGee, who turned professional when he turned 18. “She’s originally from Lucy Davis. It’s been a great partnership for me since day one. I started in the 1.20m with her, and over a couple years, we formed a partnership. She’s really changed my career.” 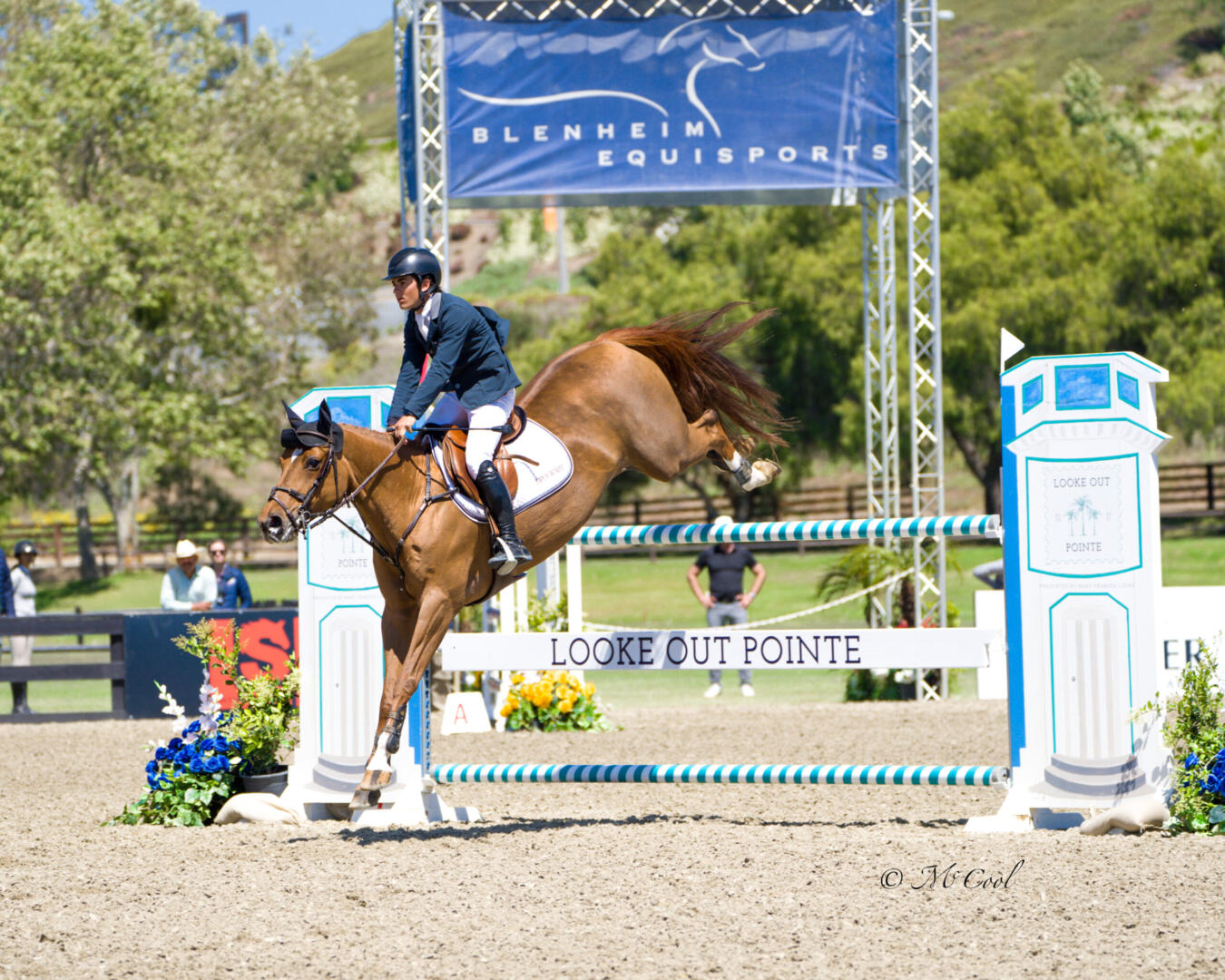 For McGee, competing at Blenheim EquiSports is an important part of that career, and the new changes made to the Blenheim facility have not gone unnoticed.

“I got here early in the week, took a look around, and I thought it was fantastic,” said McGee. “Once I got into the [Grand Looke Arena], I was really impressed. It rides fantastic. They’ve really made a number of improvements here. It’s been such a fun week to show here. So, credit to Blenheim EquiSports, they’ve done a fantastic job.”

As the winner of both the grand prix and the U25, McGee took home a BES Coolerette, a $50 Top Line Design Ribbon Wreaths Gift Certificate, a MR Shady Face Covering, and a $80 Gift Certificate from Riderzon.