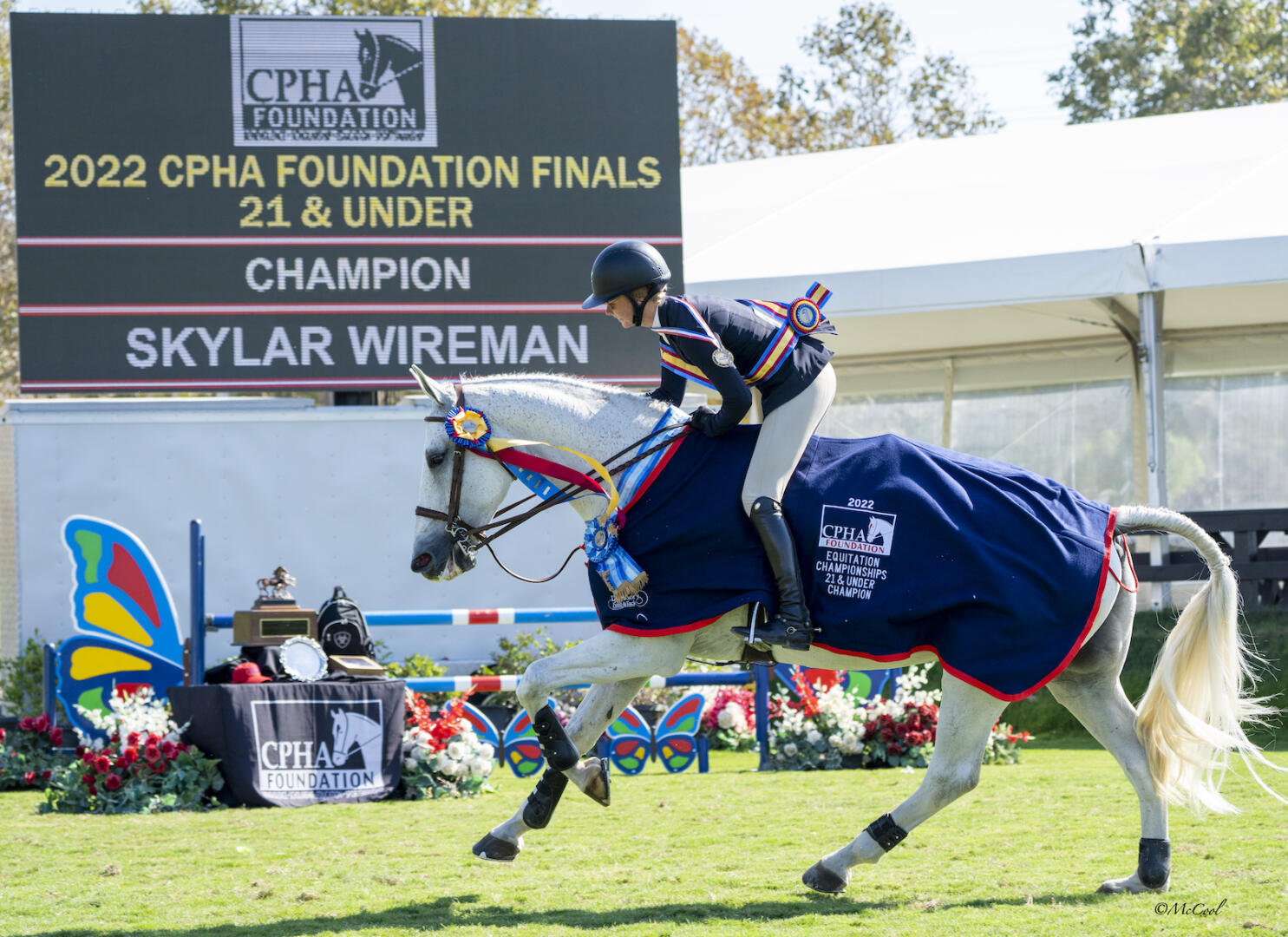 Following two rounds of competition in the CPHA Foundation 21 & Under Medal Final, sponsored by Kim Otteson of James Klein Insurance, Skylar Wireman and Paige Walkenbach sat tied for the lead ahead of the rest of the field of 51 entries.

With the top four asked to perform one final test, it was Wireman who ultimately emerged victorious aboard Famous, while Walkenbach finished in second place riding Let’s Go. 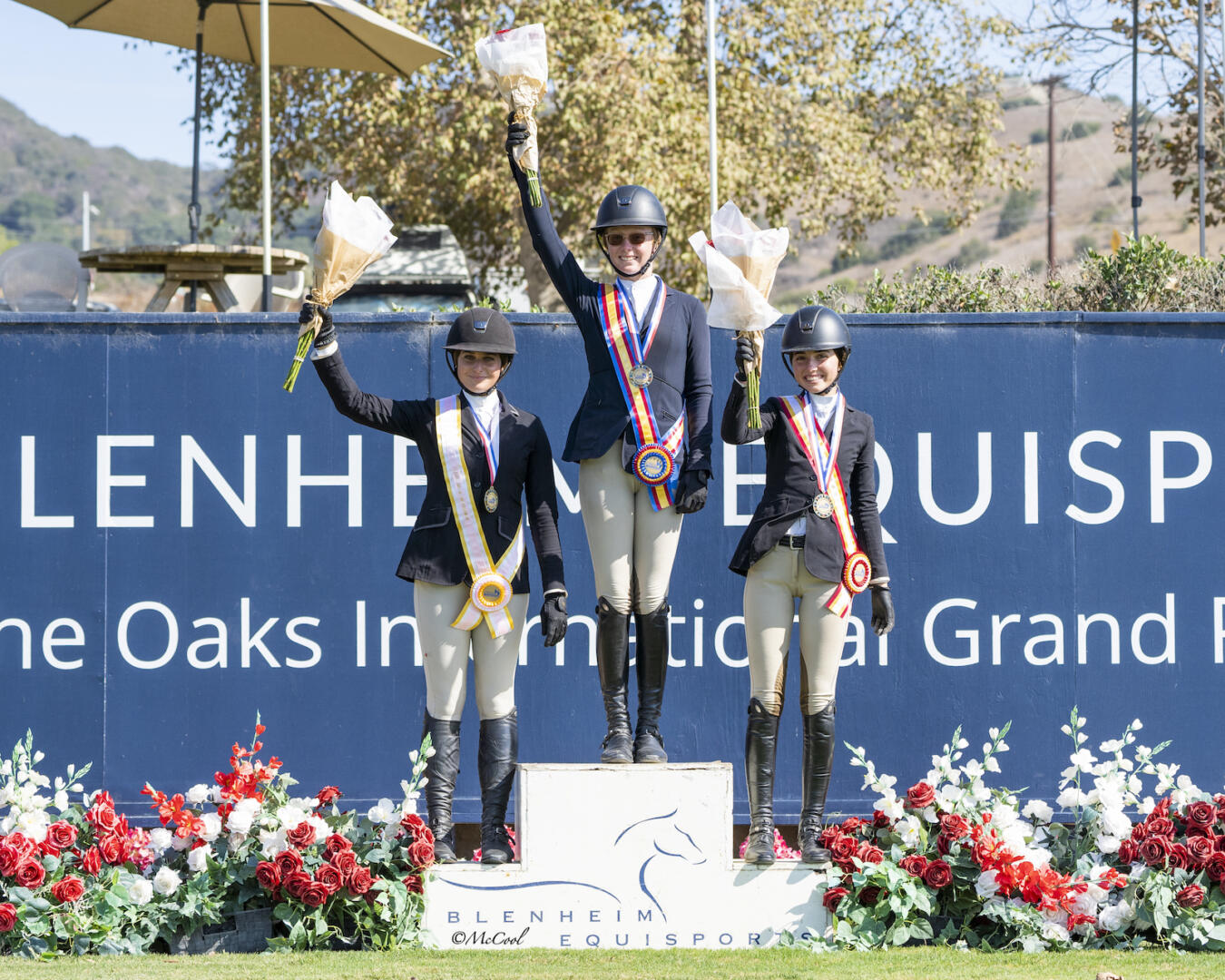 “Two years ago, I was second in this class, so I have been pretty close, knocking on the door a little bit,” said Wireman, 18. “It was nice to get the win, especially in my last junior year, and this horse that I’m riding is really rising to the occasion.”

While Wireman and Walkenbach both sat on combined scores from the two rounds of 191, Wireman’s score in the second round was slightly higher, making her technically the frontrunner and the final rider to return for additional testing.

“The test was pretty extensive I would say,” said Wireman. “For a 3’3” final, I was thinking, ‘Wow, they’re really testing us here!’ The first thing that they said was to take our stirrups off of our saddle, and I was like, ‘Oh boy!’ Then the test kind of kept going from there.”

In the test, riders were asked to enter the ring and canter directly to a triple bar, followed by a forward six stride to a vertical. From there, they were asked to execute a trot jump, canter an additional vertical, perform a turn on the forehand, demonstrate two changes of lead, canter a final oxer and show an extended trot back to the ingate – all sans stirrups.

“It was definitely quite a test; there was no easy part of that test,” said Wireman.

While it may have been quite a challenging test, Wireman nailed her execution, earning a score of 92. With Walkenbach earning a score of 82, Wireman clinched the win and Walkenbach – last year’s CPHA Foundation 14 & Under Medal Final winner – secured the reserve champion honors. Finishing in third place was Gabrielle Sokolow riding Go For It B. 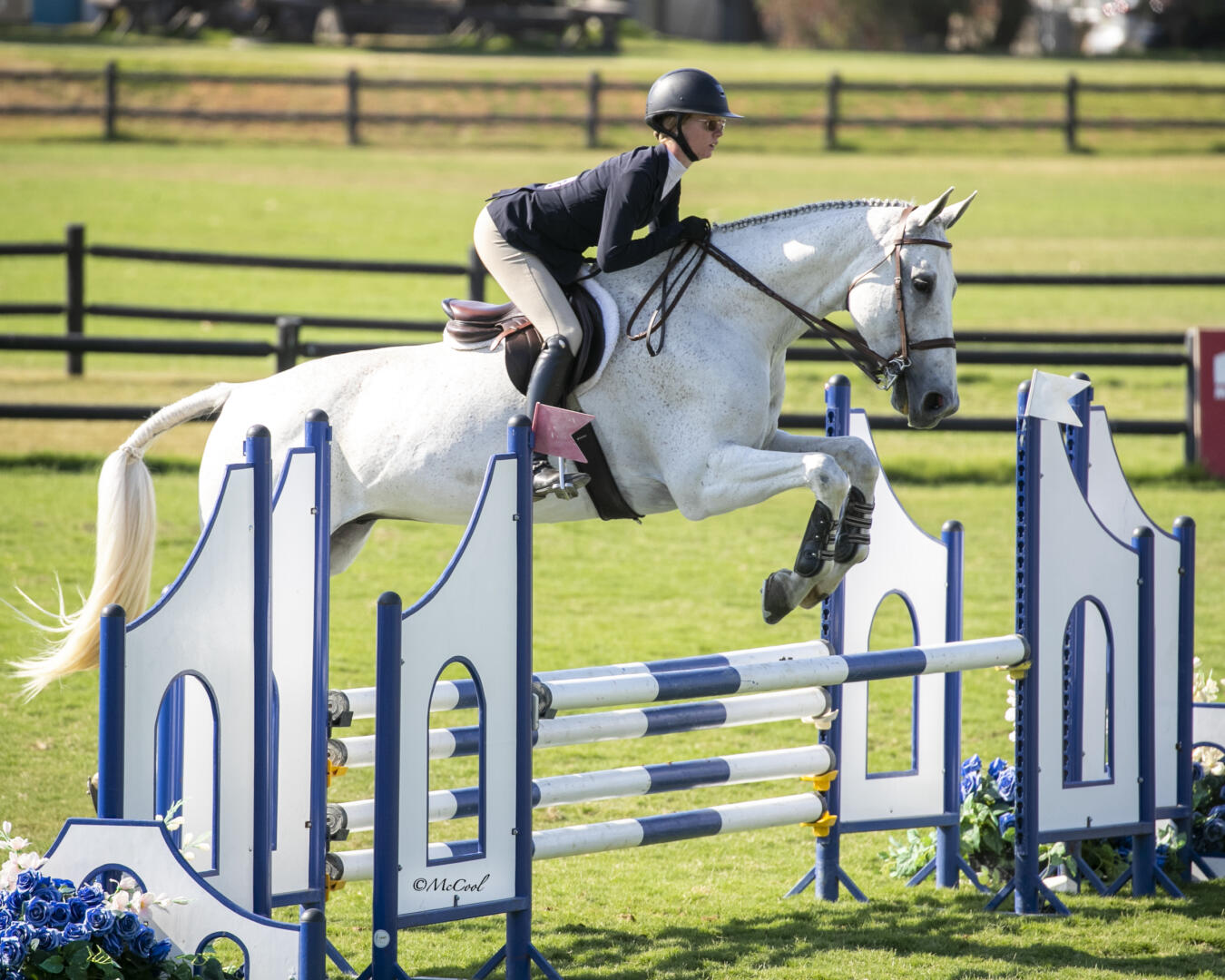 For the win, Wireman was presented with the Barbara Worth Oakford Perpetual Trophy, sponsored by Hester Equestrian. All three of the Medal Finals winners were also awarded a medal, keeper trophy, backpack, ribbon, sash and flowers, all provided by the CPHA Foundation. They additionally received a cooler, provided by DaMoors Tack & Feed; a $50 Dover Saddlery gift card; DeNiro boots from Outdoor Outfitters; and horse treats from Harlow’s Heavenly Horse Treats.

“I just want to say a big thank you again to Famous’ owner and to my mom for being an amazing trainer!” concluded Wireman.

Wireman, and Famous, owned by MKT Investments, will next set their sights on the ASPCA Maclay Region 8 Championship, to be held on Saturday, September 17, during the Blenheim Fall Tournament.

In the CPHA Foundation 22 & Over Medal Final, sponsored by Dina Sapienza of Great American Insurance, victory went to Matilda Schulman aboard Toulouse, owned by Elvenstar Farm.

Schulman started the competition off strong, jumping straight to the top of the 26-entry field with a score of 87. From there, a second-round score of 75, coupled with a well-executed work-off ride, was enough to clinch the win for the University of Southern California grad student. Finishing as the reserve champion was Catherine Westling aboard her own Rigoletto. 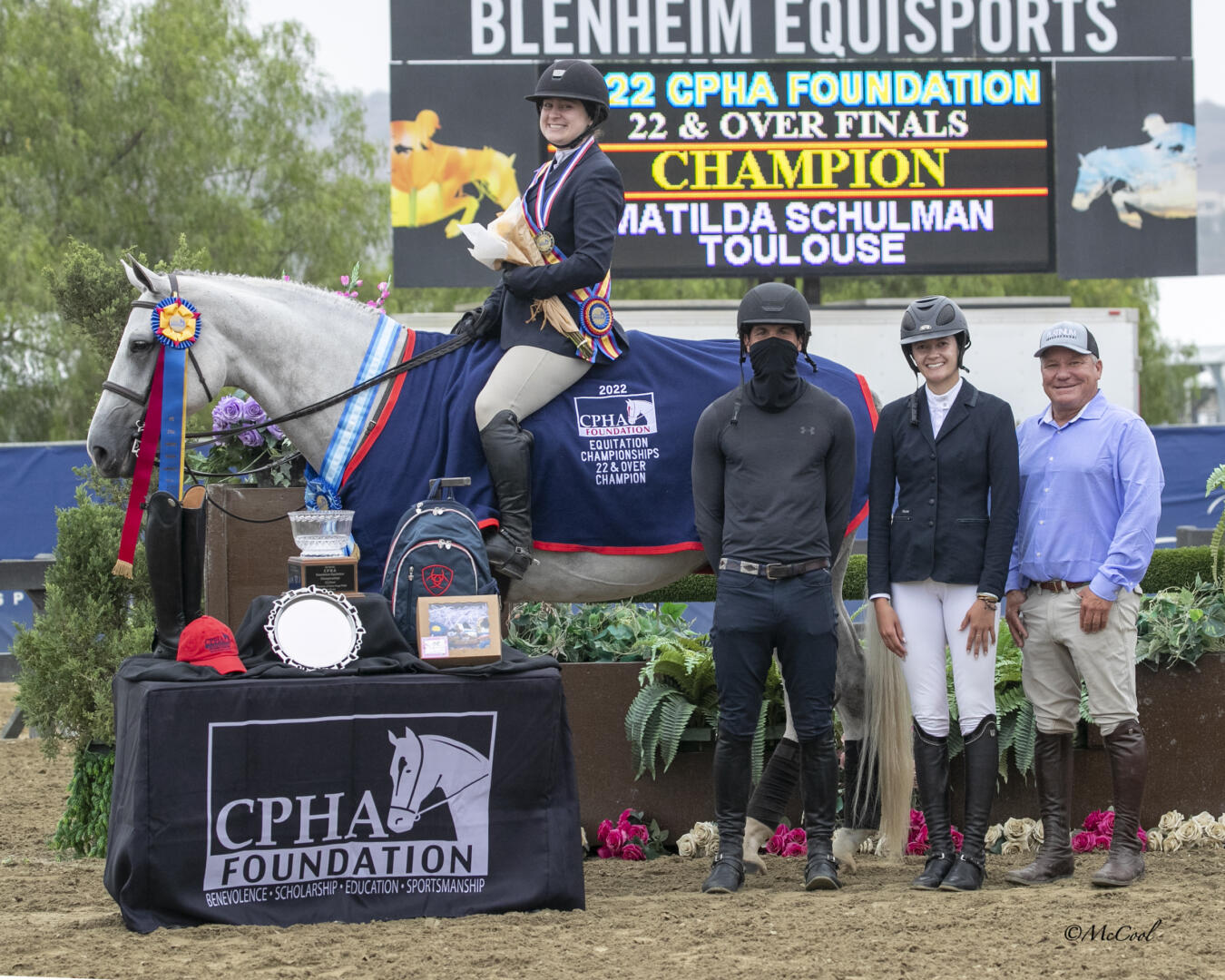 Matilda Schulman earned the win in the CPHA Foundation 22 & Over Medal Final aboard Toulouse. Photo by McCool Photography

“It feels pretty amazing,” said Schulman, 24. “I’ve been doing this class since I did the 21 and Under, so it’s been a couple years. I think I’m still waiting for it to hit me [that I won]. I know when it happened, I looked over at my trainers, and we all had the biggest grins on our faces!”

Schulman began showing her winning mount, Toulouse, in May of this year, but she then took seven weeks out of the saddle to be a part of a Shakespeare acting program in Oxford, England.

“That was the first time that I’d gotten on a horse in like seven weeks, and [Toulouse] was just ready to go. I have to say a really tremendous thank you to everyone at Elvenstar – Jim Hagman, Javier [Abad], everyone,” said Schulman, who has trained with Elvenstar since she was 17. “Javi has really helped with this horse in particular, and I have to say thank you for trusting me with him when I come home and for always finding me something to ride.” 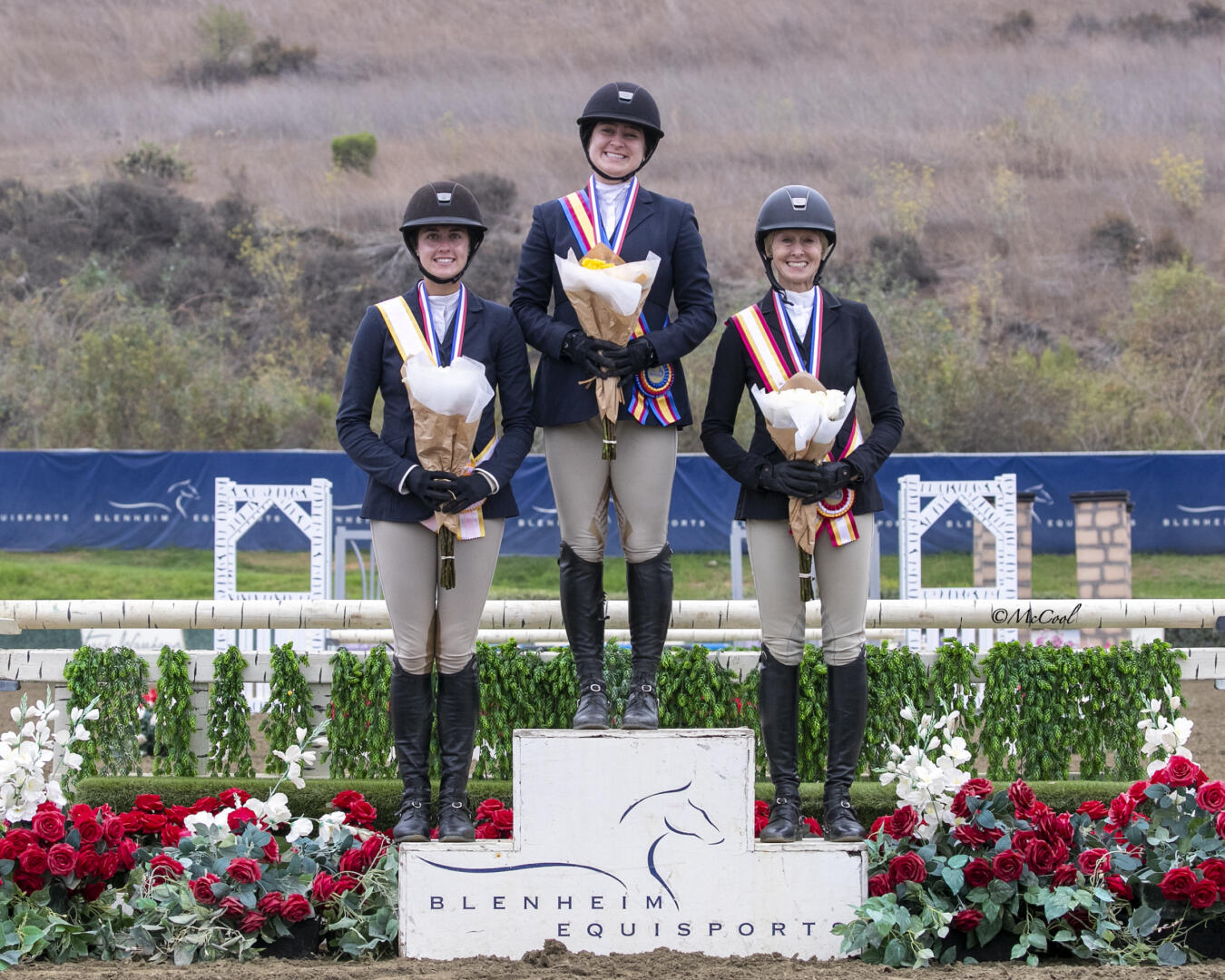 Schulman continued, “[Toulouse]’s barn name is Fernando, Ferdy or Ferdinand – we call him a million different things. I like to joke that he’s like Ferdinand the Bull. He would just be completely at ease sniffing flowers all day and standing in the shade. He’s the sweetest soul. Javier has really brought along. He’s an import from Argentina; he’s only 7, and he’s just stepped up so much already.”

For her victory, Schulman was awarded the Victor Hugo Vidal Perpetual Trophy, sponsored by Betsy Woods.

None of the other 22 entries in the CPHA Foundation 14 & Under Medal Final, sponsored by John Bragg and Bridgeport Farms, could top Grayson Pacelli who earned the win aboard his own Acoradus. 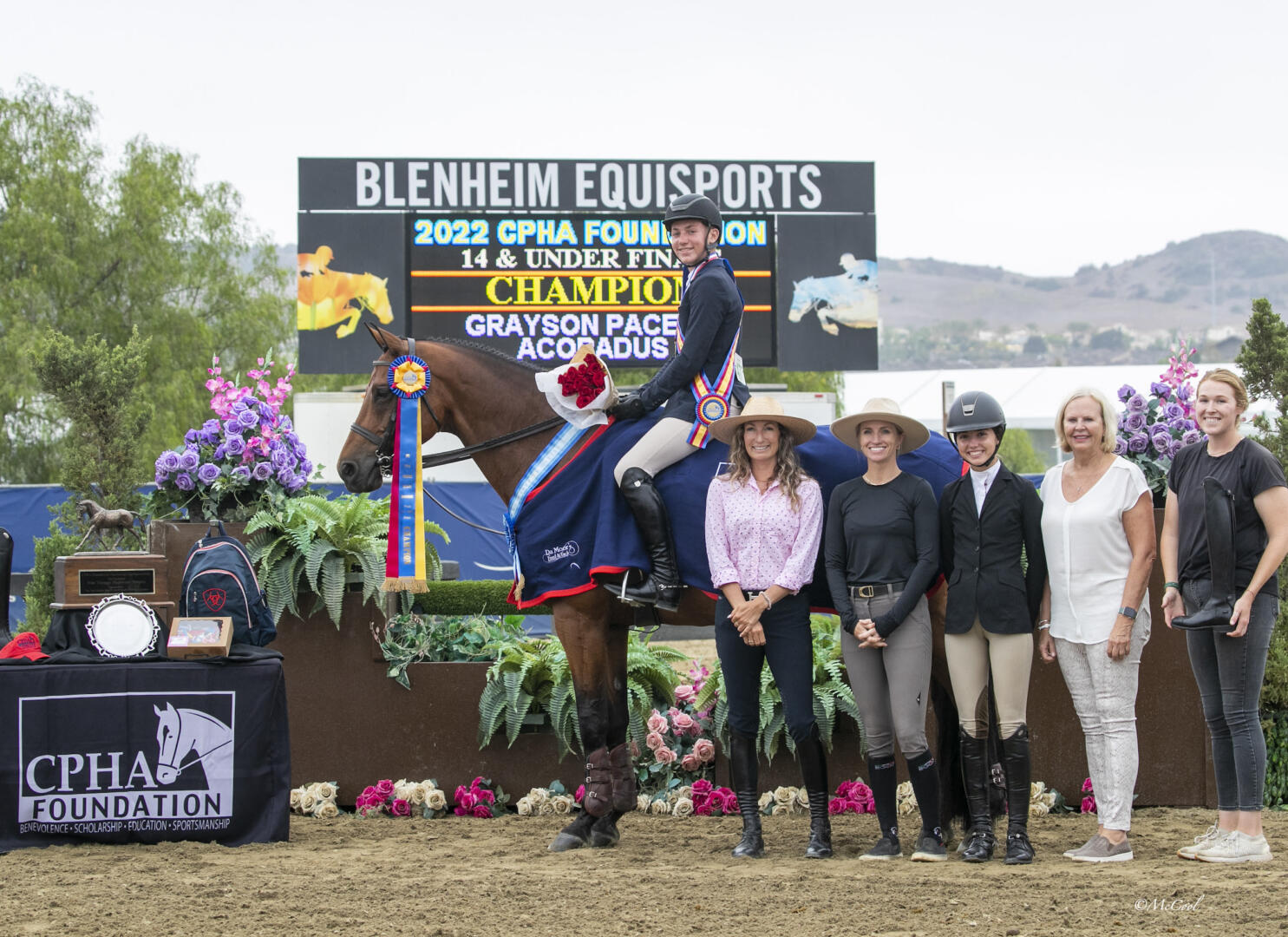 Pacelli sat in fourth place at the conclusion of the second round, and he jumped straight to the lead with a well-executed final test that included several jumping efforts, the demonstration of lead changes, and a hand gallop.

Finishing as the reserve champions were Violet Tatum and Cambalache.

“It’s super exciting,” said Pacelli, who trains with Alicia Saxton, Alysia Lynch-Sherard and Katie Gardner out of Oceancrest Farms. “It’s the first medal final that I’ve ever won and by far one of the biggest moments of my riding career so far.”

Pacelli continued, “If anything, it was a little bit overwhelming but really exciting. I was pretty nervous going into it, but once I’m in the ring, I’m not nearly as nervous. Everything just kind of went to plan and worked out!”

For the win, Pacelli was presented with the Hap Hansen Perpetual Trophy, sponsored by the Van Sickle Family.

For results from all three of the CPHA Foundation Medal Finals, visit blenheim.showgroundslive.com. To learn more about Blenheim EquiSports, the #PlaceToJump all season long, visit ThePlaceToJump.com.