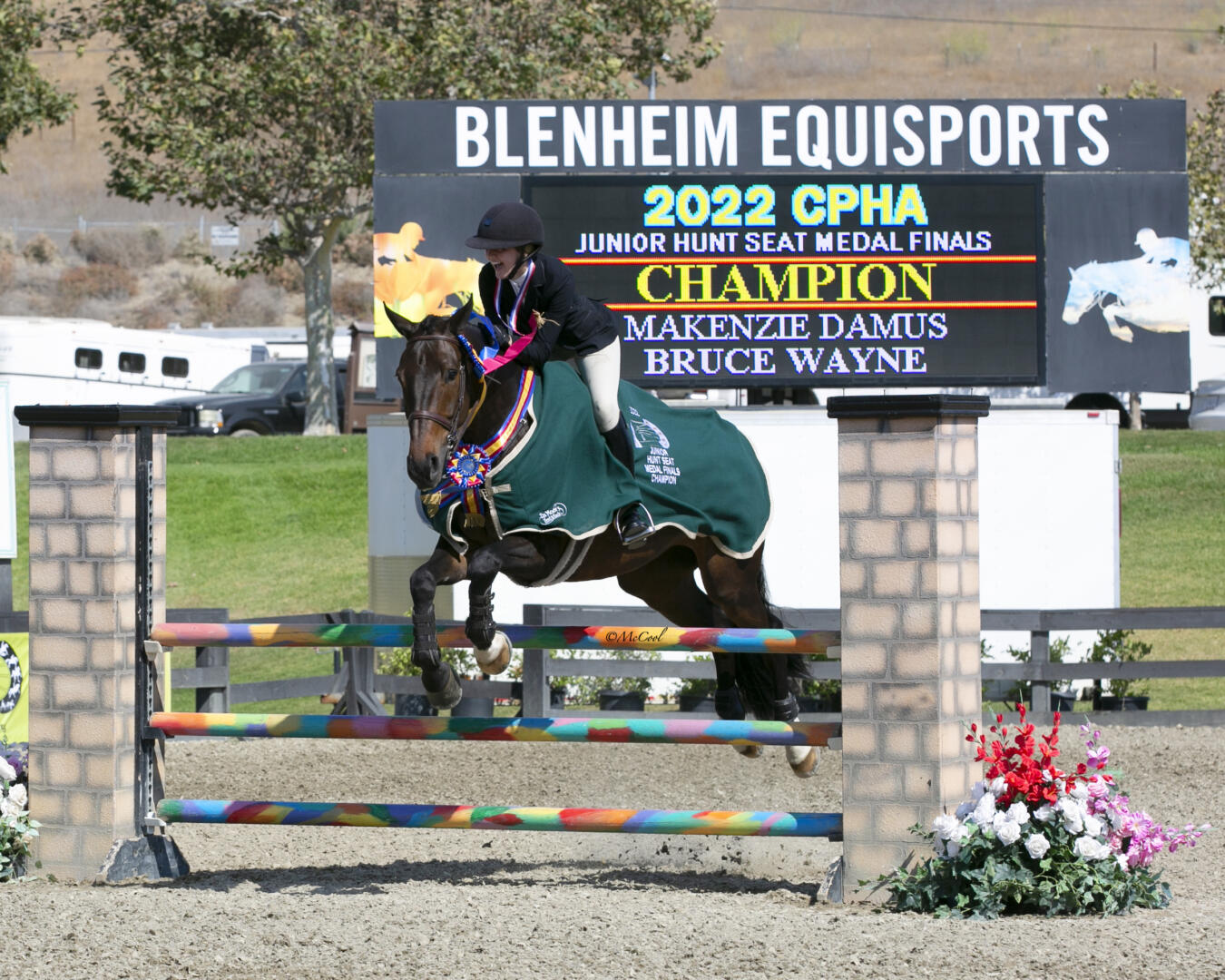 Makenzie Damus and Bruce Wayne in their winning lap. Photo by McCool Photography

The CPHA Finals, held on Friday, July 29, and Saturday, July 30, saw 50 juniors and 20 amateurs riding in the first two rounds of competition in the Grand Looke Arena at the Rancho Mission Viejo Riding Park in San Juan Capistrano, CA. From there, the top 10 amateurs and the top 10 juniors each returned for their respective third and final round.

“The first round, I thought the course was really nice,” said Damus, who earned the CPHA Junior Hunt Seat Medal Final victory aboard Bruce Wayne.  “It was inviting for everyone. I liked the long, bending lines because there wasn’t a true number for anything. It was kind of what was best for your horse.” 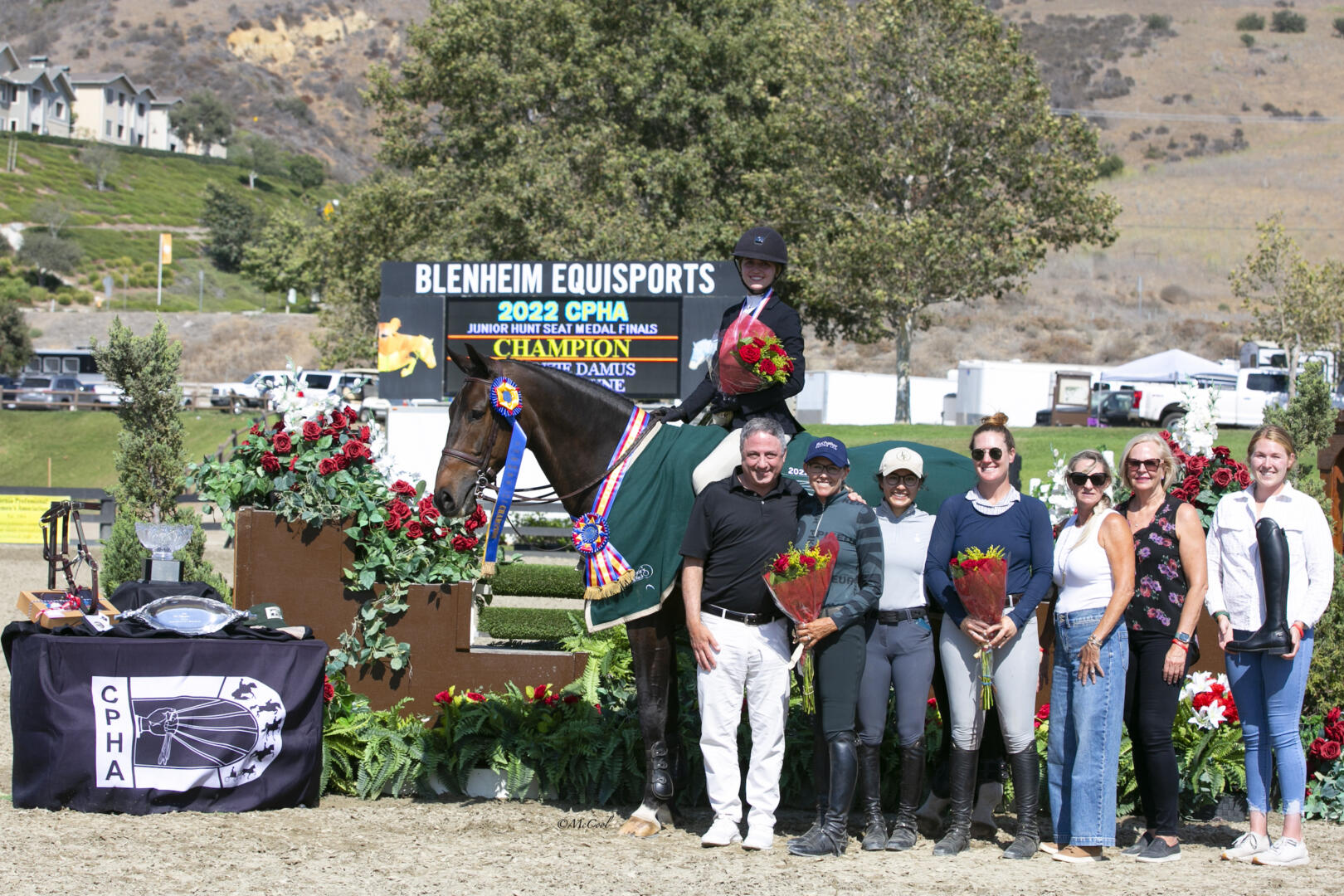 “Round two was a bit more technical, and there were more inside turn options, which helped make riders stand out more,” said Damus, who trains with Tasha Visokay at Ingenium Farm in Moorpark, CA. “A couple of lines had the option to be either six or seven, so I thought that that helped distinguish riders as well.”

In the third phase, Damus turned in a seamlessly smooth round that showcased Bruce Wayne’s adjustability and the pair’s slick rollback turns.

Judges Shane George, Jim Dahlquist, and Spencer Chapin awarded Damus with scores of 88.5, 89, and 90, for a third-round total of 267.5 and the overall winning score of 790.25. Finishing in second place with an overall total of 772.50 was Bella Primavera riding Carrico Sun. Third place went to Jake Endicott with a score of 769.25 aboard In the Stars. 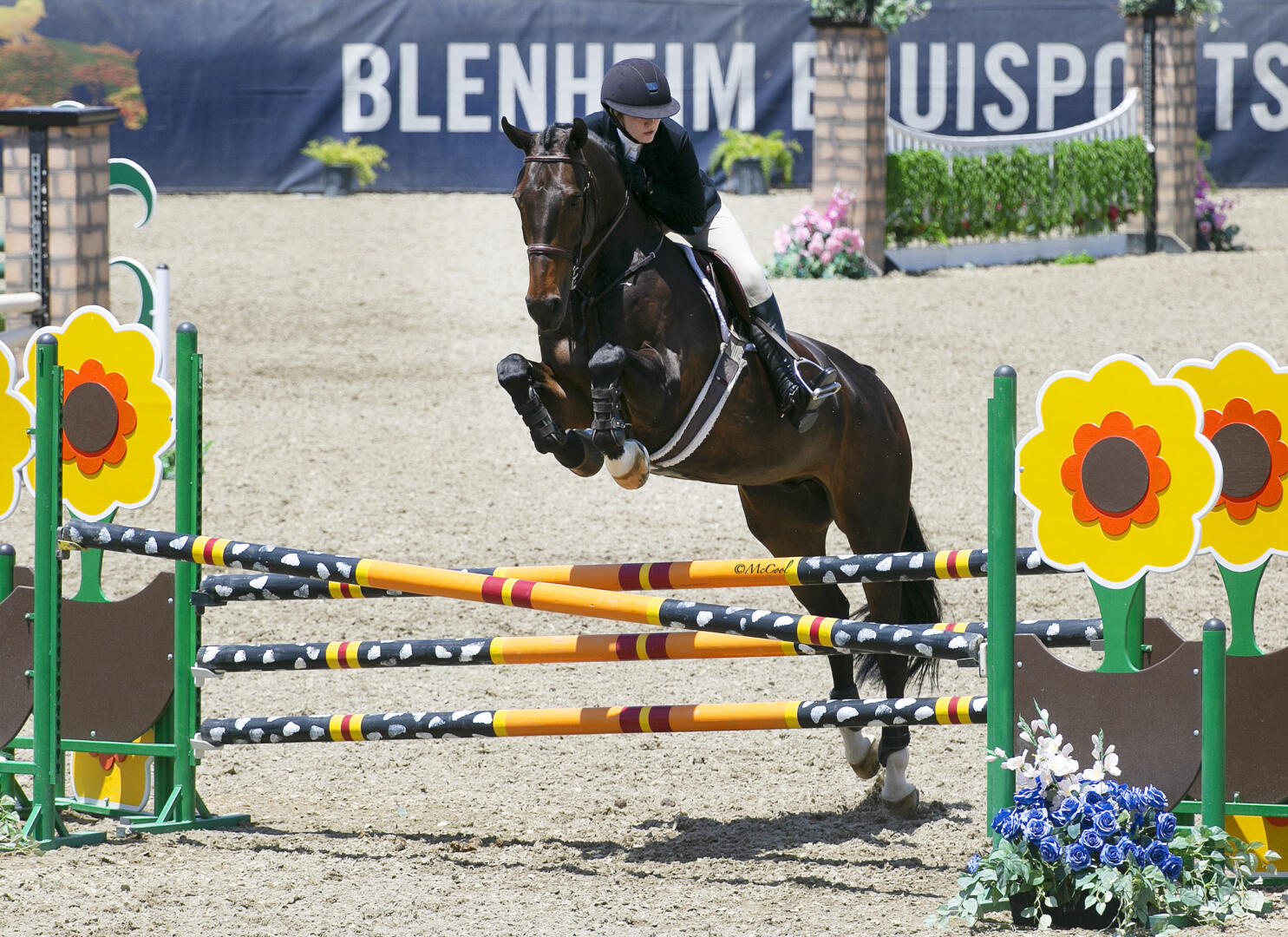 “I’ve worked really hard with this horse over the past year. My trainer, Tasha, she’s really played a huge role in winning this Medal Final,” concluded Damus, who heads next to the North American Youth Championships in Michigan where she will represent Zone 10 on the junior team. “It’s a great privilege to be able to compete in these classes against top riders. I’m just really grateful for the opportunity.”

“I have to say, this was pretty special for me to come in and do this this year,” said Munkdale, who trains with Nicole Norris at Round Meadow Farm. “Robert Ridland happened to be one of the judges back then when I won that class. So, 35 years later, to come back and win it as an amateur, is pretty special. I fell off last year at the CPHA Finals. It was not very good for me last year. My horse and I have come a long way, so it was really great to be able to come in and win this year.” 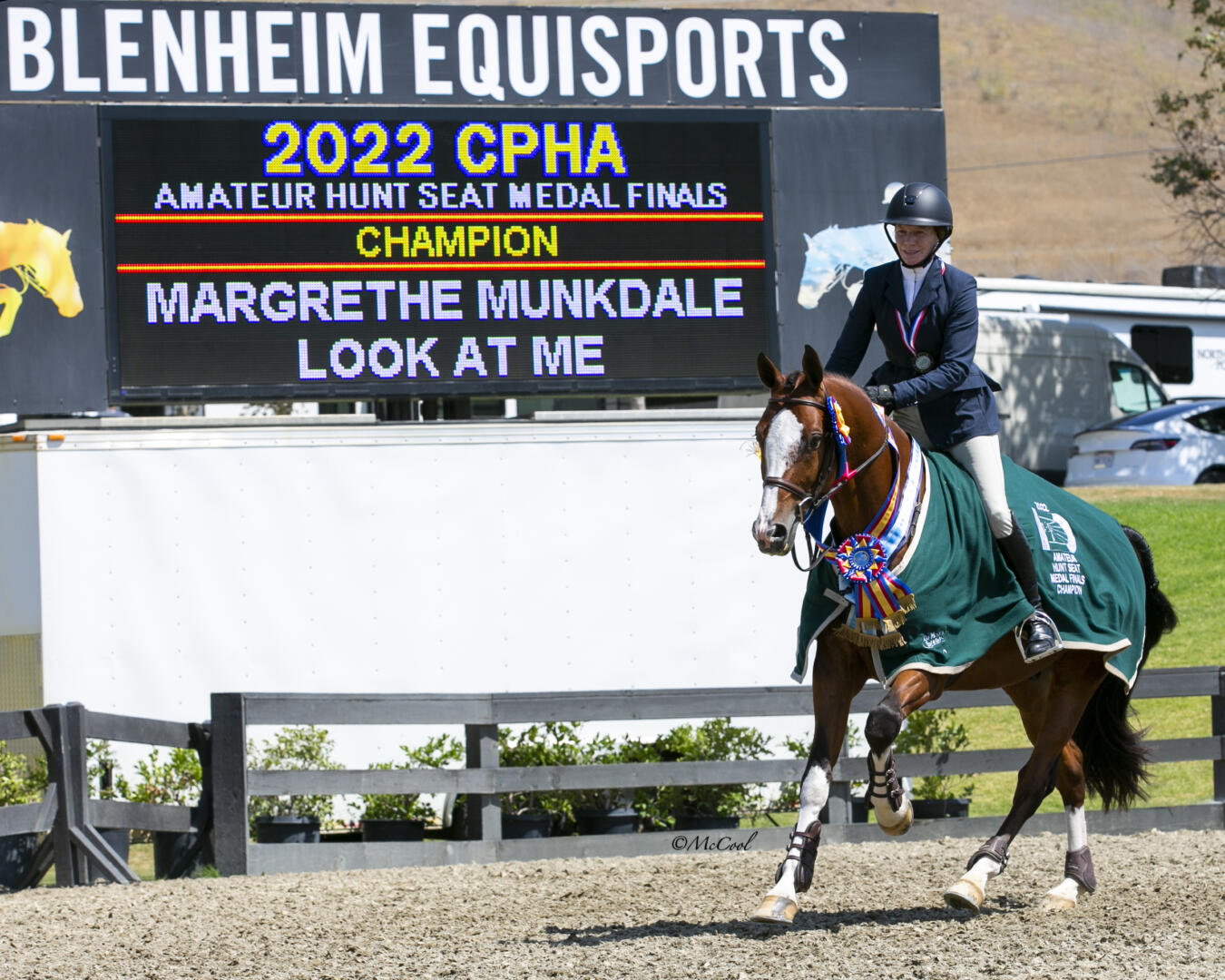 Peggy Munkdale and Look at Me.  Photo by McCool Photography

Munkdale continued, “The first round, I went in, and I was very, very nervous. That’s unusual for me, but I think, based on what happened last year and where we are now, I just really wanted it to go well.”

Munkdale and her winning mount, Look At Me, finished the first round in fourth place, and they continued to climb up the ranks each round from there.

“The second round [Look at Me] was really good,” said Munkdale of the 10-year-old Oldenburg gelding, owned by Round Meadow Farm, that she has competed for the past two years. “He answered all the questions that were being asked. We turned in a really solid round to finish second and to be second overall going into the third round. I just felt that I needed to be confident and take it jump by jump in round three and not really get stuck on numbers. I focused on how we addressed all of the jumps. He did his job very, very well.” 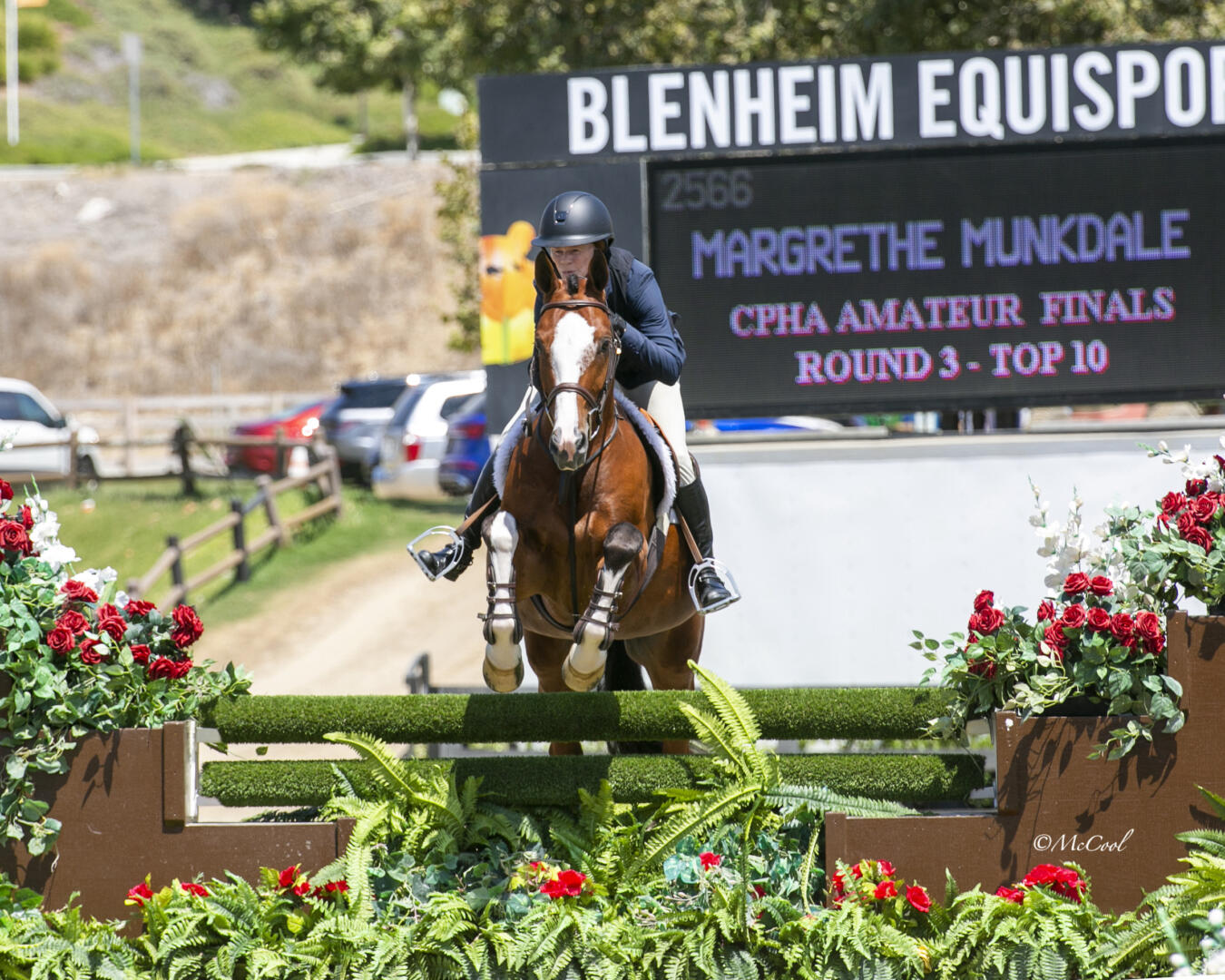 Peggy Munkdale and Look at Me.  Photo by McCool Photography

For the win, Munkdale was also presented with a CWD gift certificate, a Valencia Saddlery leather halter, a cooler, a CPHA belt buckle sponsored by Archie Cox; a CPHA riding shirt, sponsored by Tom Rattigan of G2 Insurance; DeNiro Salento boots, sponsored by Outdoor Outfitters; Harlow’s Heavenly Horse Cookies, and more. Munkdale’s name will also be added to a perpetual trophy, sponsored by DiAnn Langer, and, as the top 36 and over rider, Munkdale additionally received a special cooler, ribbon, and sash. 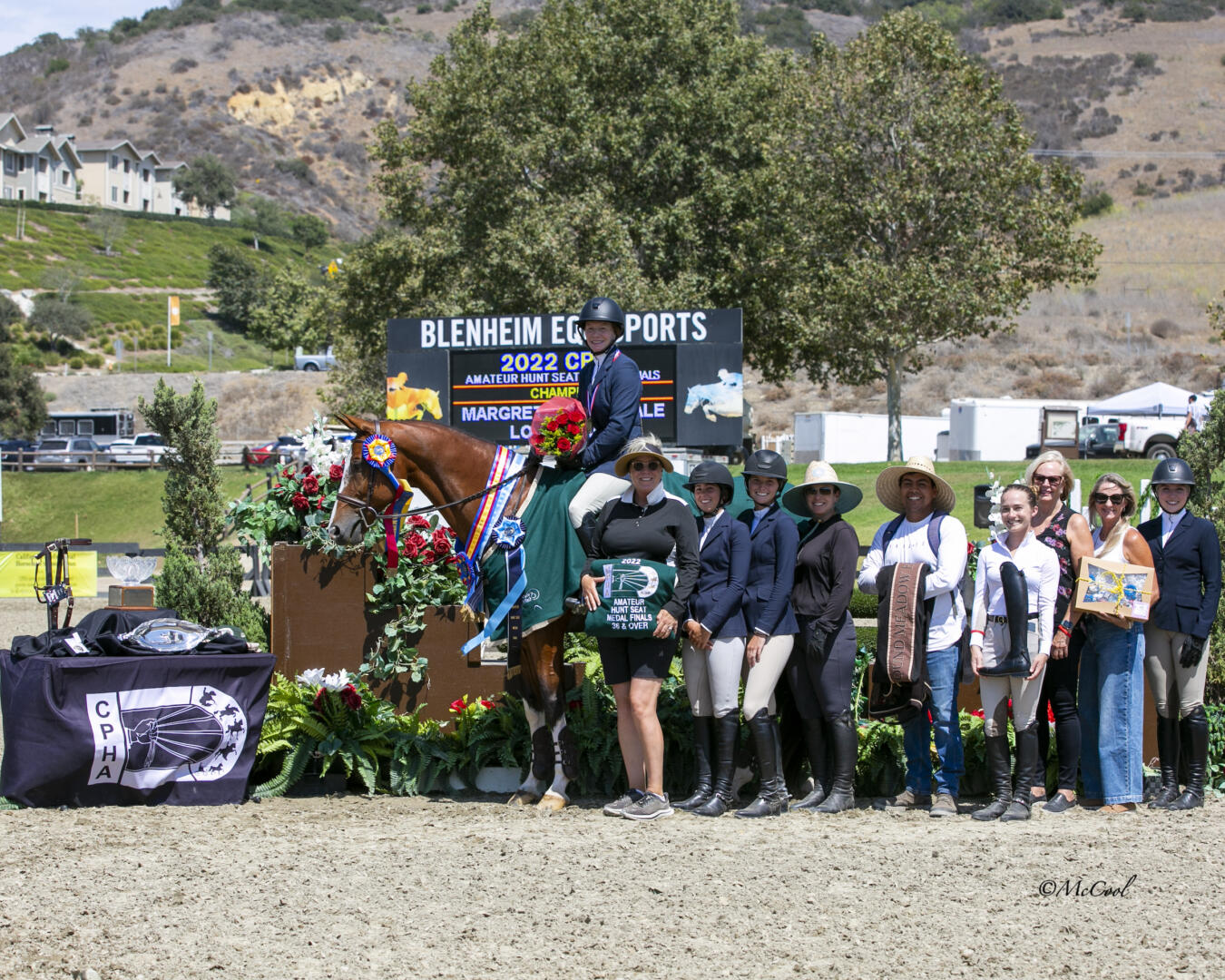 Peggy Munkdale was presented as the winner of the CPHA Amateur Hunt Seat Medal Final. Photo by McCool Photography

“I would just like to say a big thank you to Nicole Norris and Rose Carver for all their help, as well as the CPHA organization,” concluded Munkdale. “I think they did a really nice job putting on these medal finals, and all of their sponsors and awards were amazing.”

For full results of the CPHA Junior and Amateur Medal Finals, visit blenheim.showgroundslive.com.

Equitation competition continues next week at Blenheim EquiSports with the Blenheim August Festival, to be held August 3-7.