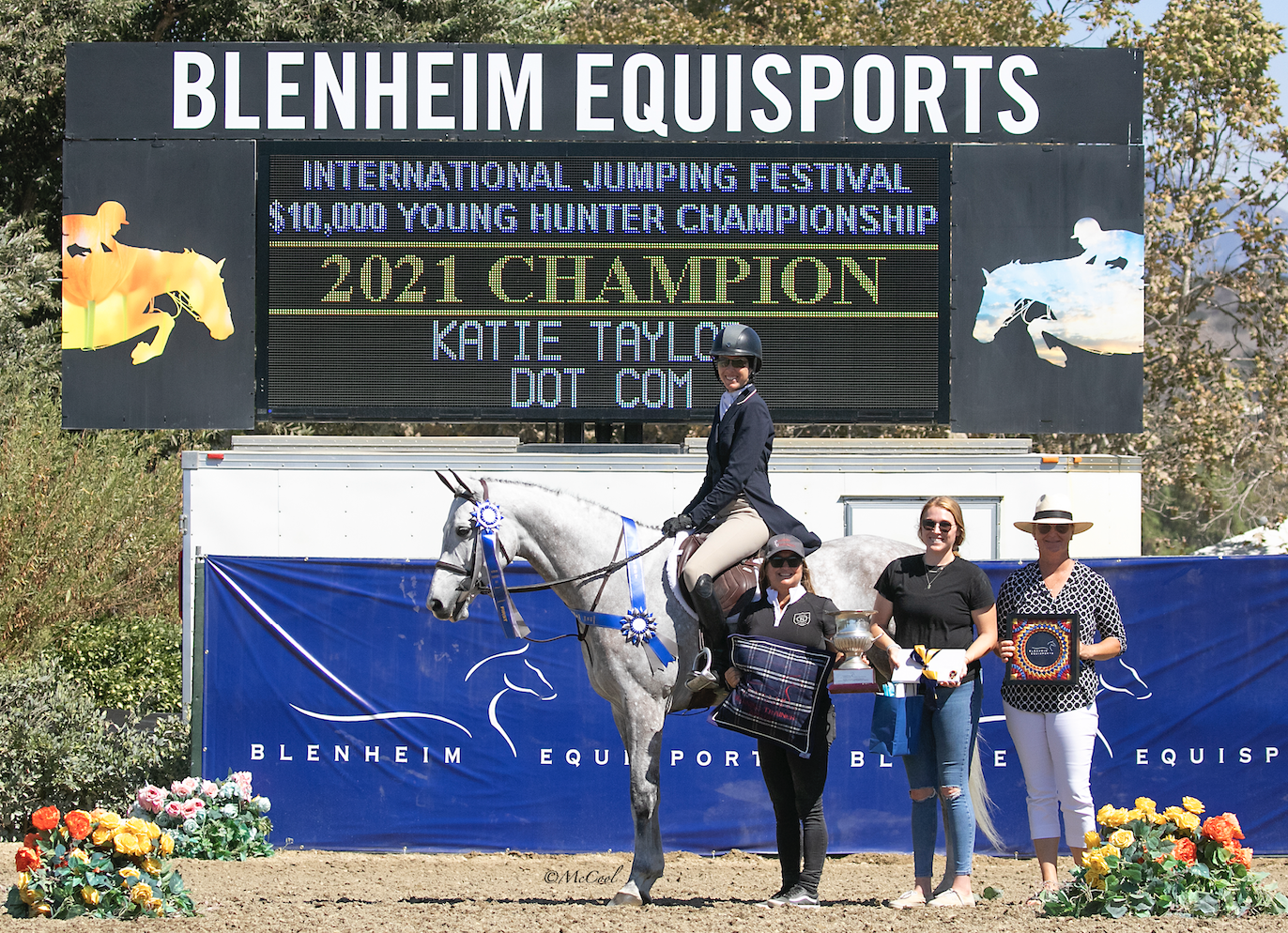 The championship class, held in honor of Marcia “Mousie” Williams, a Show Jumping Hall of Fame inductee and California Professional Horseman’s Association Lifetime Achievement Award winner, marked the culmination of the highly successful 2021 Blenheim EquiSports Young Hunter Series. Throughout the year, the series offered owners free entries for all Young Hunter classes, including $1,000 Young Hunter Classics held during every Blenheim EquiSports rated competition. With the series continuing to grow exponentially since its inception, Thursday’s finale welcomed 34 horses, all ages 7 and under. 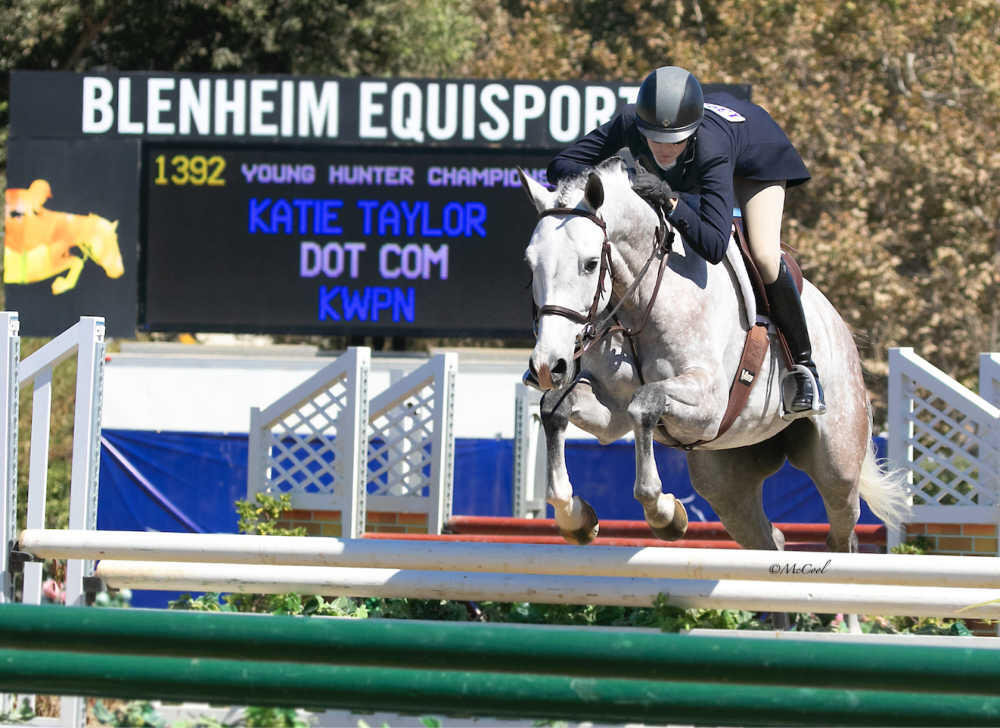 Following an opening round in front of judges Mark Jungherr and Gary Duffy, Taylor and Dot Com already led the way on a first-round score of 87. Sitting in second place with a score of 86 were Gabriela Pattinson and Caso 2, owned by Carrie Silvano, and a score of 84 put Jason McArdle and Ascott, owned by Finesse Sport Horses LLC, in third.

The top 12 entries then returned for round two, and each of the top three proved their first-round success was far from a fluke. With a second-round score of 86 for Dot Com, an 85 for Caso 2 and an 84 for Ascott, the three horses nearly replicated their round-one scores, and – with the final results based on the average score from both rounds – the standings remained the same.

“This is huge for Dot Com,” said Taylor, who finished third in the class in 2020 with the 7-year-old Dutch Warmblood gelding. “To win feels awesome.”

The Lookers acquired the striking roan gelding three years ago and since then have been bringing him up the ranks, often at Blenheim EquiSports.

“We were in Europe looking for a horse, and we happened to be at a horse show and saw this little head poking out of a trailer,” explained Tonia Looker. “We saw that it had polka dots on it, and we thought it was the most fabulous horse we ever could have. So, we begged the people to sell the horse to us, and since then, he’s been a work in progress, but a great work in progress. We’ve had a lot of family and friends working with us along the way.” 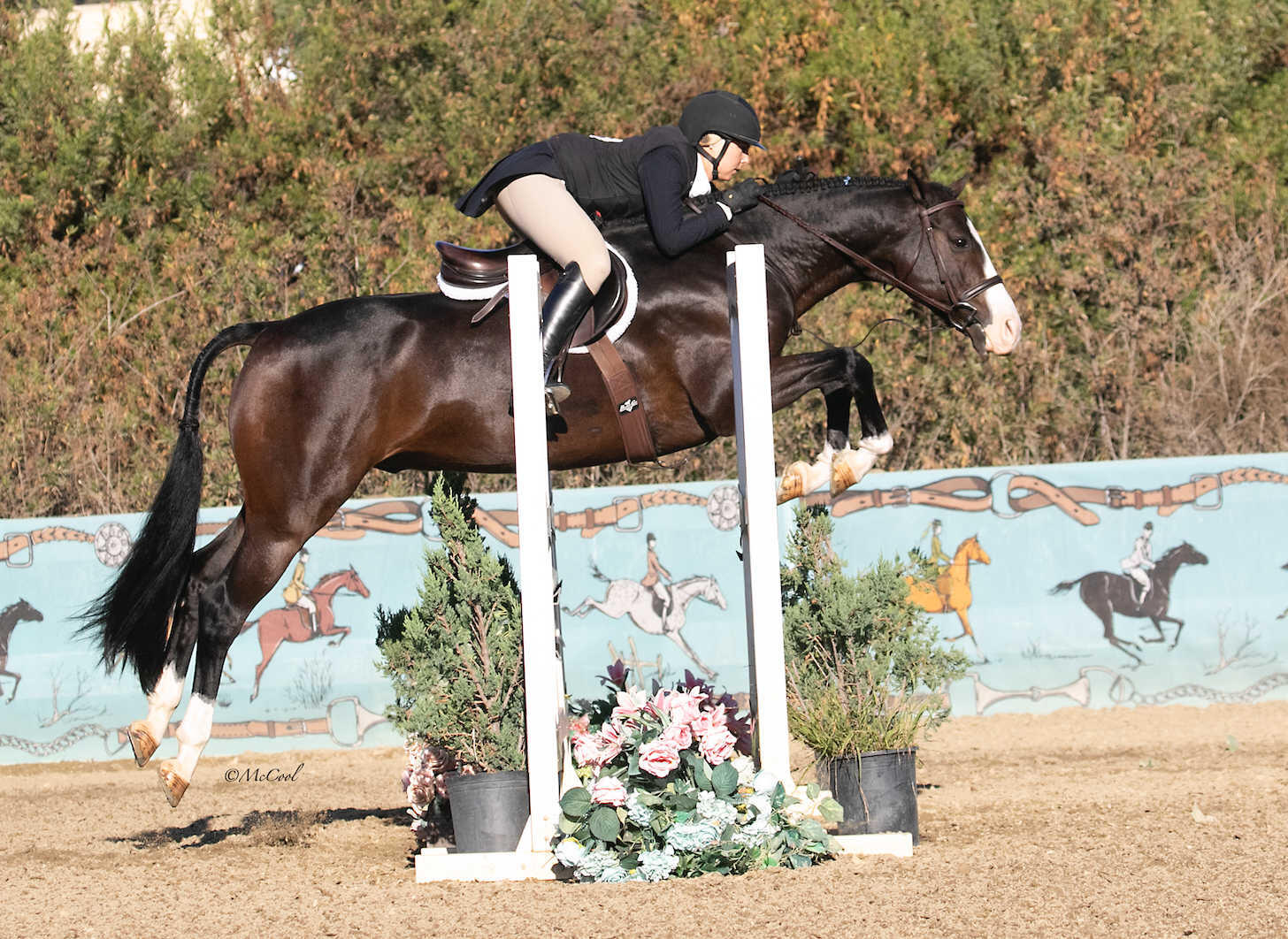 Looker continued, “We’re really grateful to Blenheim EquiSports for providing this class and this series. As the years have been progressing, and we’ve been doing it, there are more and more entries in it, and it’s really taking off.”

Blenheim EquiSports program coordinator, Alexandra Zulia, is thrilled with the growth of the Young Hunter Program which was implemented into the Blenheim calendar the same year US Equestrian added the divisions, gave them an A rating and HOTY status.

“It’s honestly taken off like wildfire,” said Zulia. “I think the first year we started out with 18 horses and maybe half a show day would be dedicated to young hunters. Now, at every single horse show, the young hunter divisions start at 8 a.m. and can go until dark. There are so many young hunters that have taken advantage of this program, and today’s championship with 34 entries was just phenomenal. It was absolutely stunning to see the depth and quality of these horses today.” 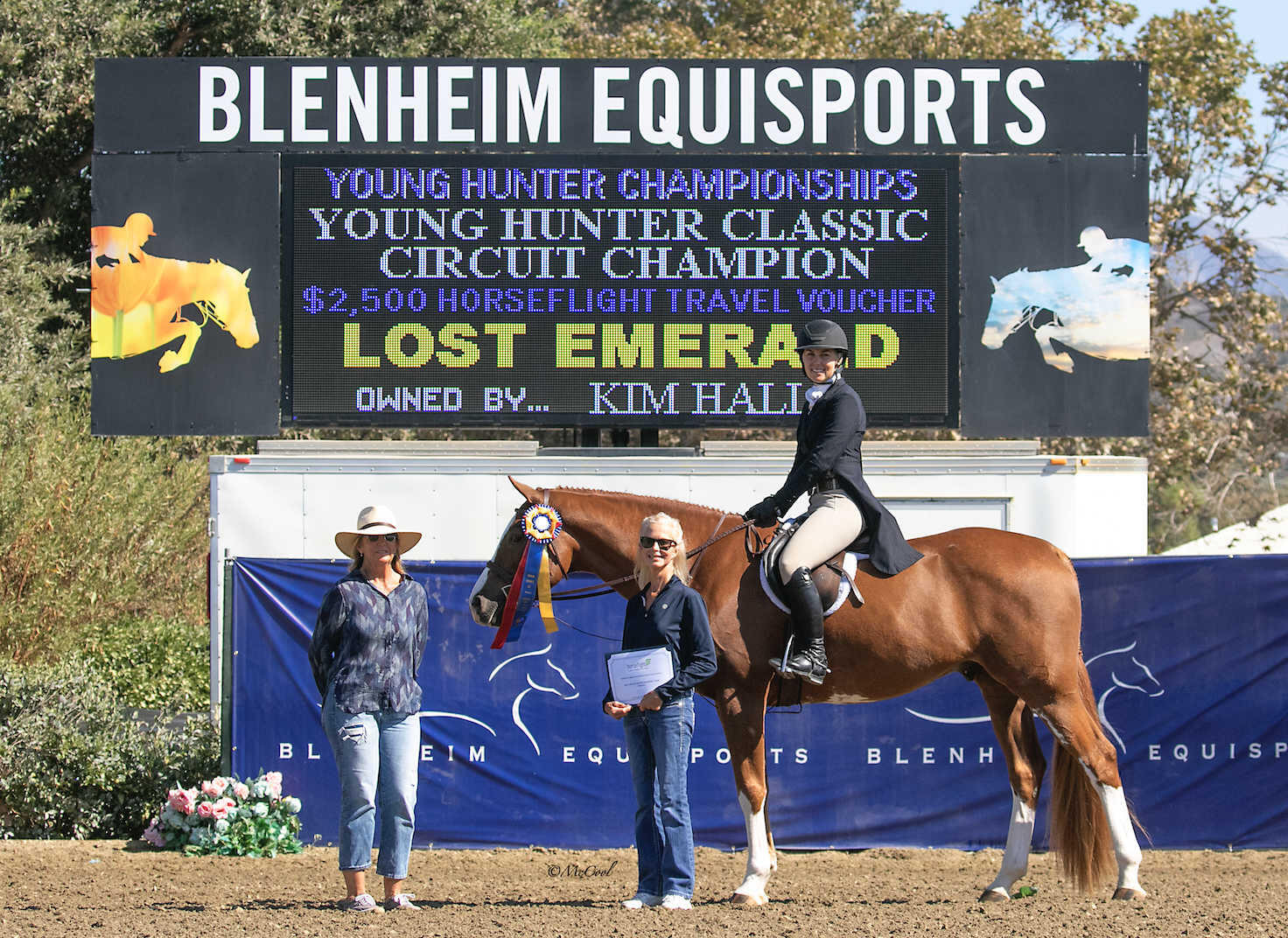 At the break a presentation was made to the Horseflight Young Hunter Classic Circuit Award winner, Lost Emerald, owned by Kim Hall and ridden by Gabriela Pattinson and Jenny Karazissis. As the owner of the horse that accumulated the most points in the 2021 Young Hunter Classics throughout the year, Hall received a $2,500 Horseflight travel voucher.

“We imported [Lost Emerald] about a year and a half ago, and he has been nothing but wonderful,” said Hall of the 7-year-old Irish Sport Horse gelding (Emerald van’t Ruytershof x Carlingfords Rainbow). “He just has a fabulous jump. I just can’t say enough good about him. Gabby and [trainer Devon Gibson of Seahorse Riding Club] have just made it so much fun as an owner.” 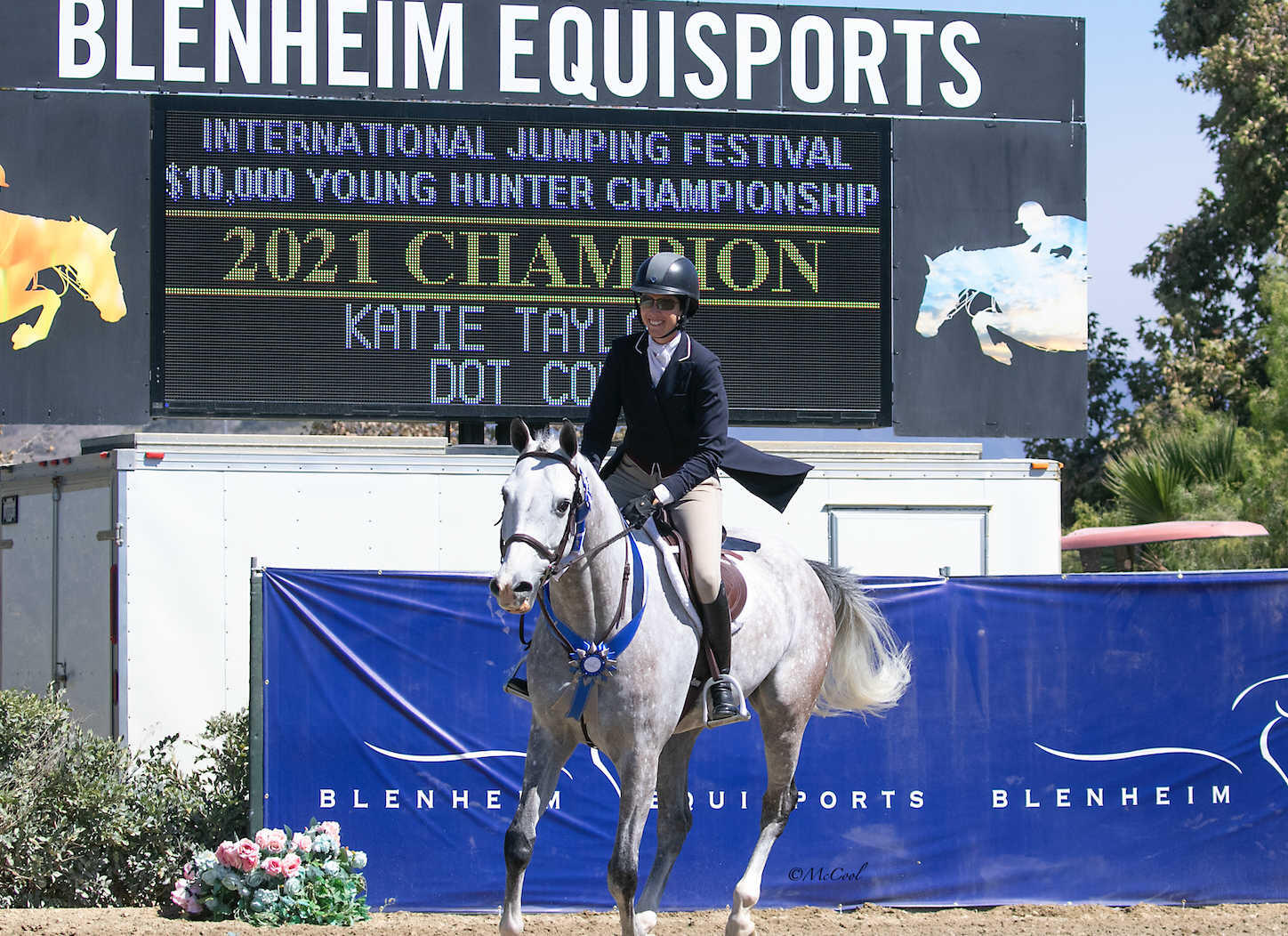 Horseflight is an international horse transportation company with
multiple hubs in the US. They are known worldwide for their attention to detail and professional services with your horses’ safety and well being as their number one priority. Horseflight will coordinate your horse’s travel anywhere in the world. Horseflight celebrates over a decade of top horse transportation all over the globe.
For more information and to request a quote please visit them on
the web at horseflight.com.