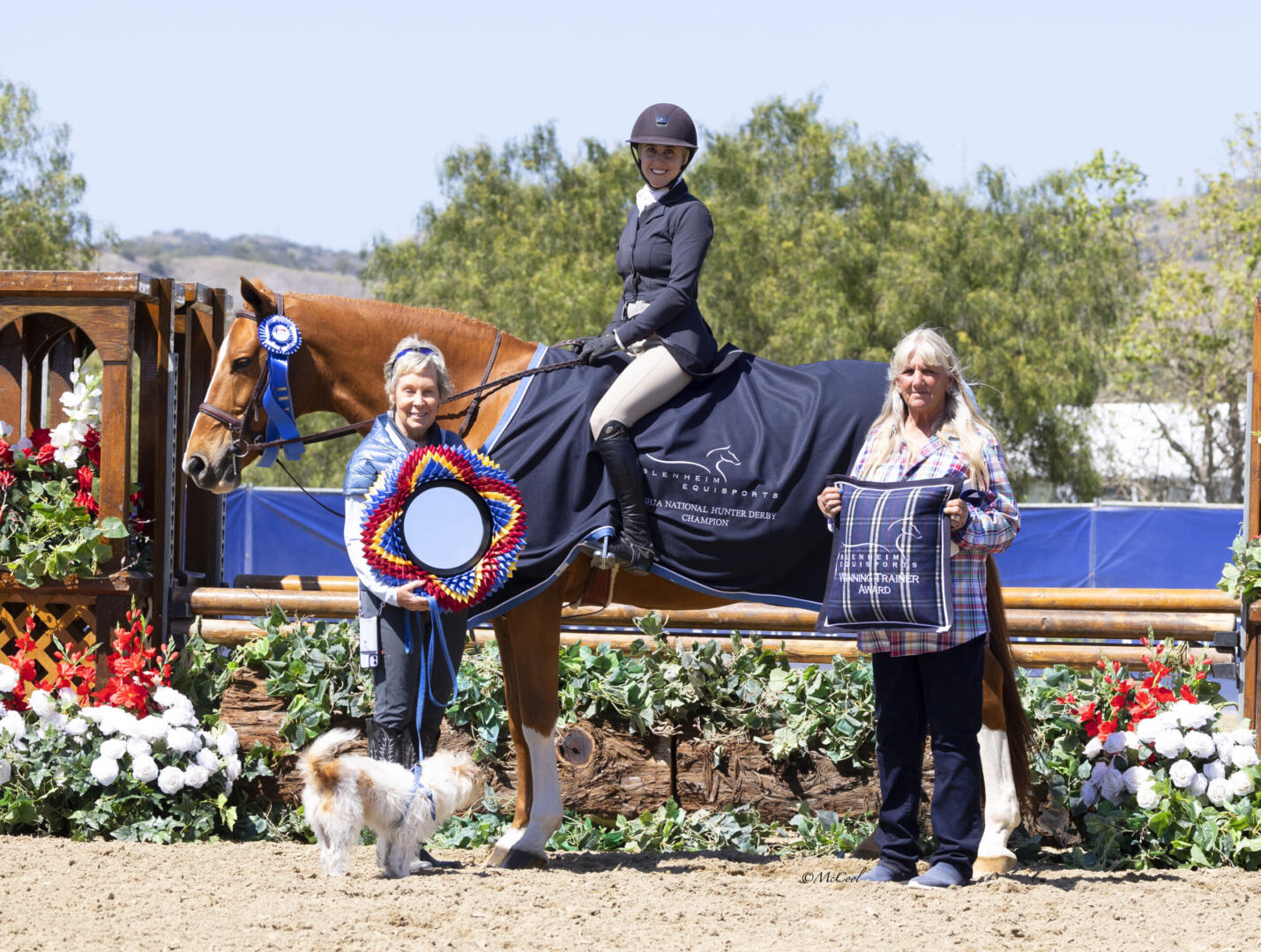 Julia Rossow and Crowd Pleaser were presented as the winners of the $15,000 USHJA Professional National Hunter Derby on Thursday. Photo by McCool Photography

For Rossow and Crowd Pleaser, their top call came in Thursday afternoon’s $15,000 United States Hunter Jumper Association (USHJA) Professional National Hunter Derby. With a total first-round score of 89, the pair held the top spot on the leaderboard at the conclusion of the opening classic round, and, as the top 12 riders returned to the Olympic Sand Ring in reverse order of their standings for the handy round, Rossow and Crowd Pleaser only further cemented their lead.

A well-executed trot fence and slick inside turns across the Lewis Pack-designed course earned Rossow and the 15-year-old Selle Français gelding a base score of 86 from judges Rachel Kennedy and Brian Lenehan. That score, coupled with four high-option bonus points, gave them a round score of 90 and an overall score of 179. 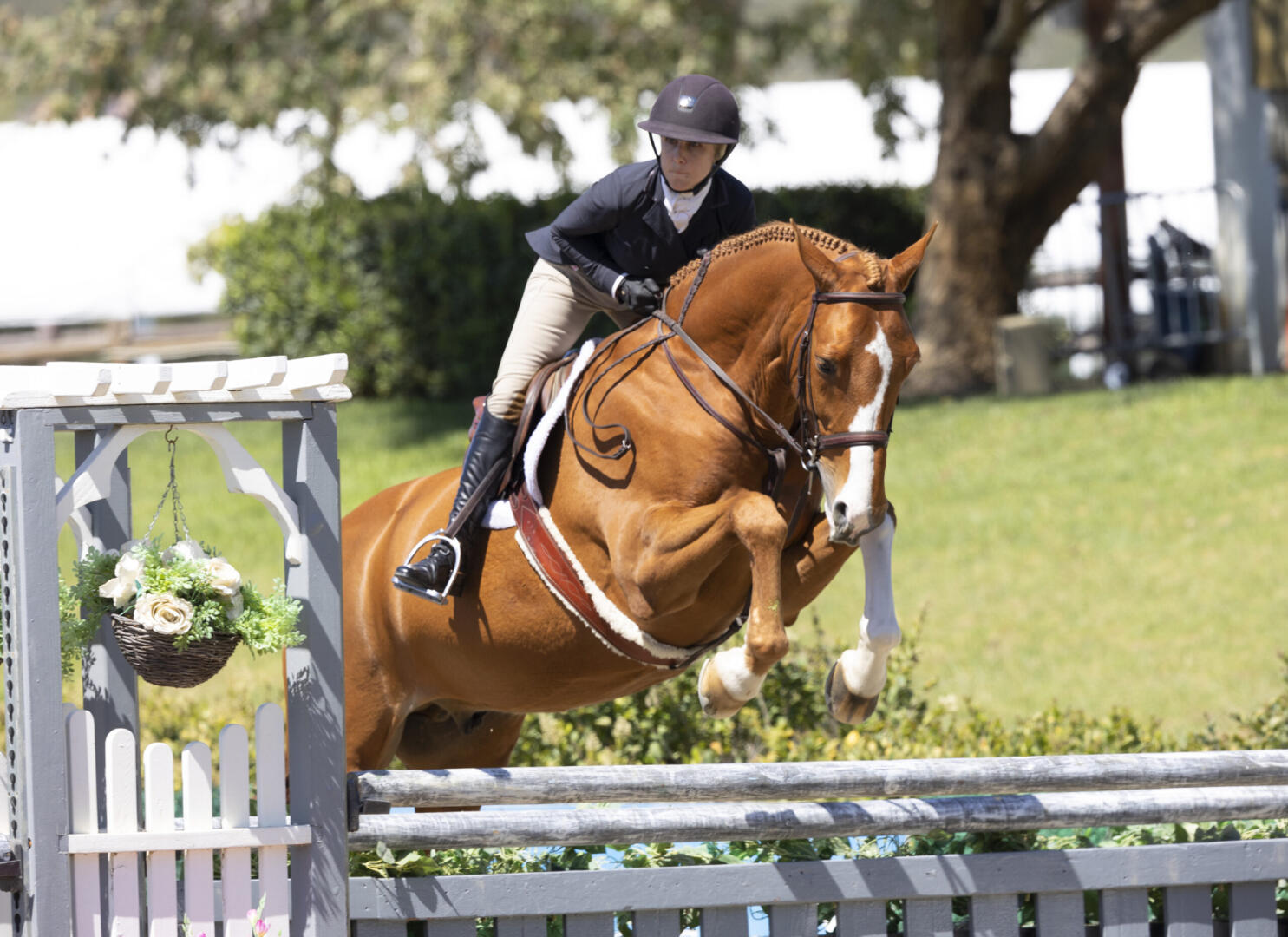 Also holding their position from the first round through to the end were second-place finishers Halie Robinson and Baas, owned by Talia Jones Roston, who earned scores of 87 and 89 for a 176 total. Third place with 174 total score went     to Chad Mahaffey and Paperboy, owned by Brighton Farms.

“For the handy, there were a lot of really sneaky inside turns that you could do, and if you had a younger or more inexperienced horse, you could go all the way around,” explained Rossow, who began riding Crowd Pleaser at the end of 2021.

“I kind of vacillated between keeping it really safe and riding right around or putting a little pressure on myself,” continued Rossow. “He’s super handy, and I knew that if I just really made it like there was no other option, he would be right there for me. He more than came to the party. He was right on it, as I went in the gate, I was like ‘yeah, I can do this. I can do those turns.’ I didn’t go inside to the trot jump because I just thought that was a little bit of a blind turn, but he was so game.” 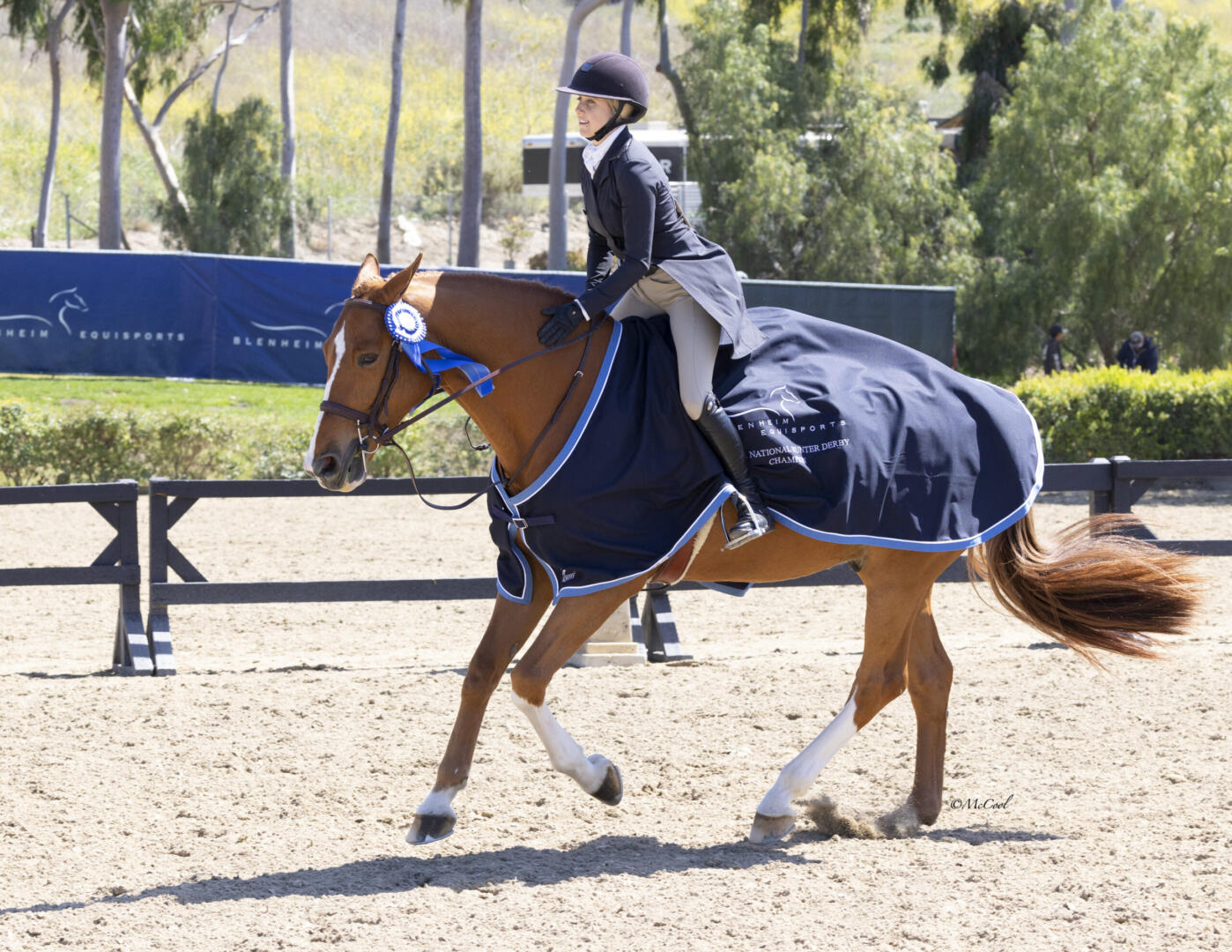 Crowd Pleaser, or “Taxi” as he is known at home, previously saw great success with Nick Haness in the irons, and now Rossow hopes to continue along that trajectory.

“It’s a huge privilege to be part of the [West Coast Equine Partners LLC] team – to come on to the team with people who are just such wonderful supporters of the horses and the riders and the industry as a whole,” said Rossow. “It’s a little nerve wracking but good pressure to put on myself. Everyone’s just been really supportive, and it’s been super fun to be part of the team; it’s a huge privilege. With Taxi, I hope to continue on the derby path and let him shine and do his thing!”

In the $10,000 USHJA Junior/Amateur National Hunter Derby it was Katie Cook and Co Star’s time to shine, as the pair topped an 18-horse field for the win.

At the conclusion of the first round, Cook and her own 11-year-old Holsteiner gelding sat in third place with a score of 87. As the third to last to return for the handy round, Cook and Co Star repeated their performance, earning a second score of 87, including all four high-option bonus points, for a 174 total. 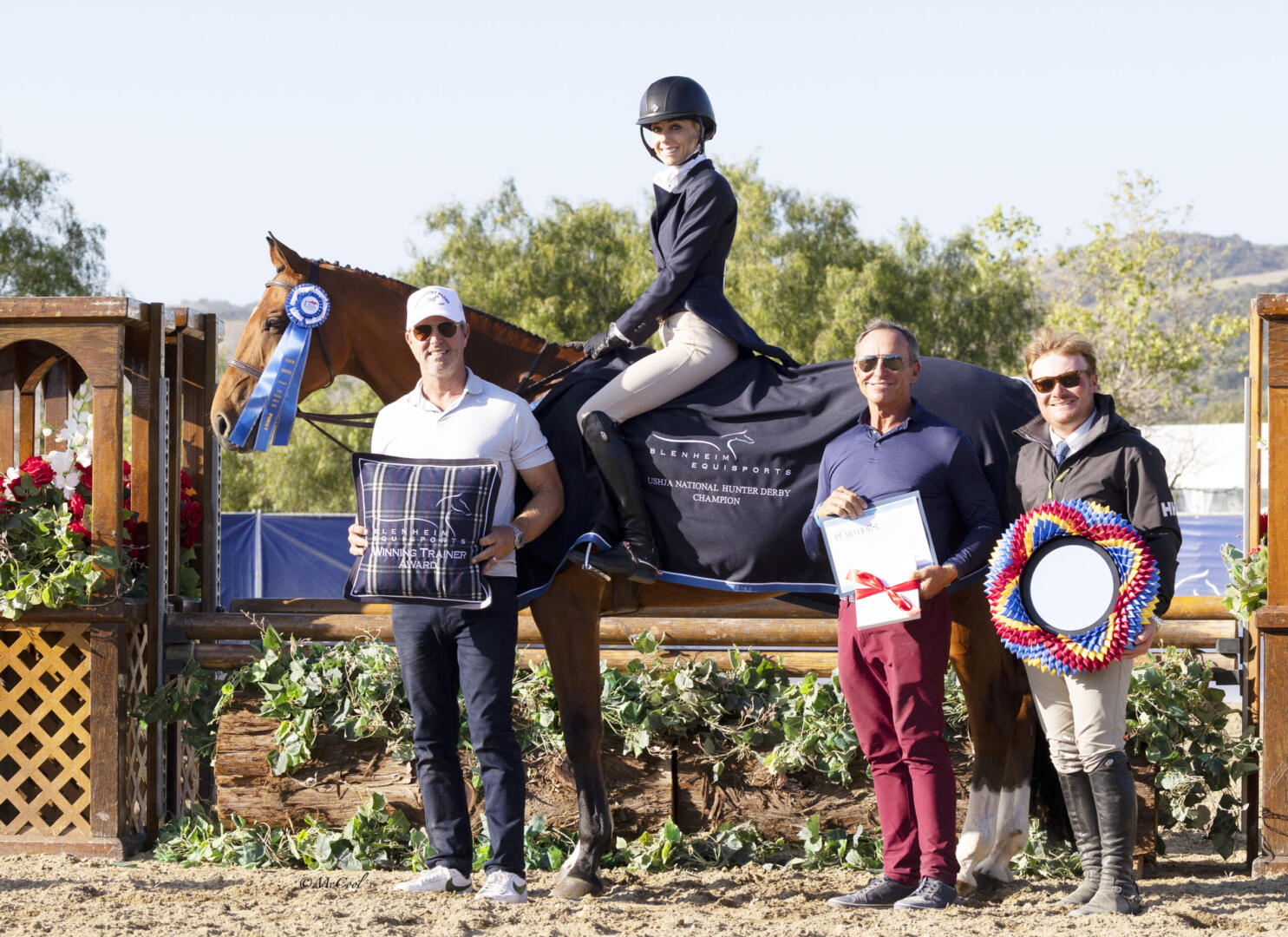 That consistency proved to be the key, as lower scores for the final two returners clinched the win for Cook. Taking second place with an overall score of 169 were Violet Tatum and Valedictorian, while third place went to Alexis Meadows and Verdict with a score of 168.5.

“I was pretty nervous, but I had been so good in the [Adult Amateurs] earlier today that I decided to take the high options, which I’ve never done before,” said Cook who purchased Co Star earlier this year. “The horse was just right there with me. The first round just felt pretty solid; then in the handy, I was nervous because there are a lot of right turns which is not my strength. He landed on the right lead everywhere that I asked.”

The victory starts a perfect winning record for Cook and Co Star, as the class marked their derby debut as a partnership. 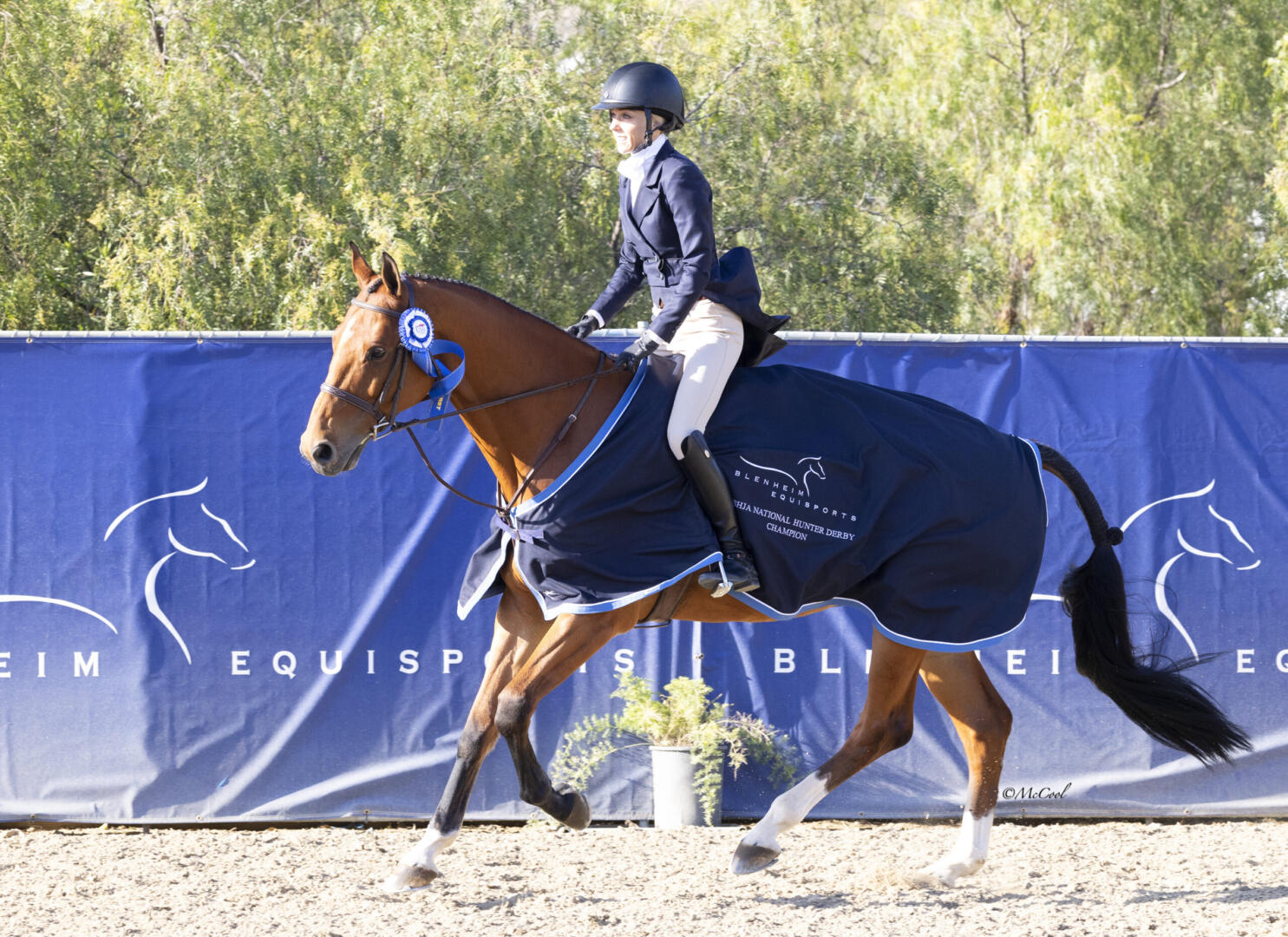 Like Rossow, for the win, Cook received a Riderzon gift certificate, a Topline Design Ribbon Wreath gift certificate, and an EquiTex scrim sheet, and, as Cook’s trainer, John Bragg of Bridgeport Farms received an embroidered tack room pillow from The Clothes Horse, presented by Nick Byassee of Equestrian Design LLC.

Competition at the Blenheim Spring Classic III continues on Friday, April 15, with highlight events of the weekend including Friday’s $25,000 Looke Out Pointe American 1.45m Grand Prix and Saturday’s $20,000 Markel Insurance Bronze Tour Classic. Blenheim EquiSports is the #PlaceToJump all season long. Learn more and view the free livestream of all rings by visiting ThePlaceToJump.com.